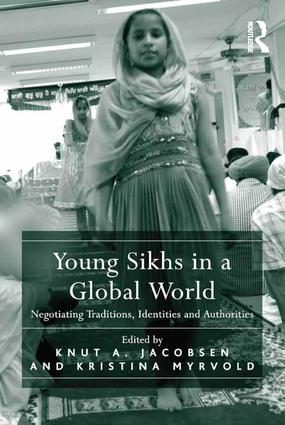 Young Sikhs in a Global World

By Knut A. Jacobsen, Kristina Myrvold

In attempting to carve out a place for themselves in local and global contexts, young Sikhs mobilize efforts to construct, choose, and emphasize different aspects of religious and cultural identification depending on their social setting and context. Young Sikhs in a Global World presents current research on young Sikhs with multicultural and transnational life-styles and considers how they interpret, shape and negotiate religious identities, traditions, and authority on an individual and collective level. With a particular focus on the experiences of second generation Sikhs as they interact with various people in different social fields and cultural contexts, the book is constructed around three parts: 'family and home', 'public display and gender', and 'reflexivity and translations'. New scholarly voices and established academics present qualitative research and ethnographic fieldwork and analyse how young Sikhs try to solve social, intellectual and psychological tensions between the family and the expectations of the majority society, between Punjabi culture and religious values.

’Young Sikhs in a Global World offers excitingly wide-ranging ethnographies of Sikhs in Europe, North America and cyberspace. These authoritative studies of the dynamics of being Punjabi, and being Sikh, while engaged both locally and transnationally, make a valuable contribution to understandings of identity formation, inter-generational relations and gender, diasporic literature and musical and linguistic transformations.’ Eleanor Nesbitt, University of Warwick, UK ’An excellent addition to the study of the Sikh community in Europe, the essays represent fresh voices, break new ground, and offer new insights about challenges confronting the generation of Sikhs growing up in Europe.’ Gurinder Singh Mann, University of California, Santa Barbara, USA