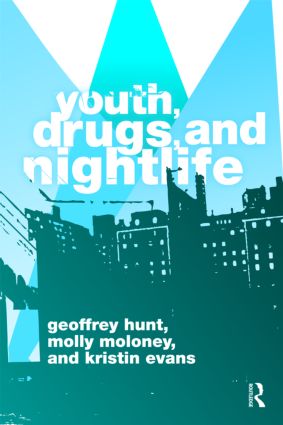 Youth, Drugs, and Night Life examines the relationships between the electronic dance scene and drug use for young ravers and clubbers today. Based on over 300 interviews with ravers, DJ’s and promoters, Hunt, Moloney, and Evans examine the different social groupings that make up the scene. The authors explore the accomplishment of gender, sexuality, and Asian American ethnic identity and critically analyze the negotiation of risk and pleasure within the world of raves and dance clubs. We learn about young ravers and clubbers’ frustrations with recent attempts to control clubs and raves and their skepticism about official pronouncements on the dangers of ecstasy and other drugs, in this book that pivots between the local, the national, and the global in its approach.

'[W]hat is most pleasing is that this book documents the rave scene from the perspective of its participants.'

'One of the book's strengths is its analysis of rave as a global youth culture.'

'Perhaps what this book illustrates best is how rapidly youth nightlife cultures evolve.'

Part 1: Theory and Methods for Studying Youth 1. Epidemiology Meets Cultural Studies: Studying and Understanding Youth Cultures, Clubs, and Drugs 2. Clubbers, Candy Kids and Jaded Ravers: Introducing the Scene, the Participants, and the Drugs Part 2: The Global the National and the Local 3. Clubbing, Drugs, and the Dance Scene in a Global Perspective 4. Youth, US Drug Policy, and Social Control of the Dance Scene 5. Uncovering the Local: San Francisco’s Nighttime Economy Part 3: Drug Pleasures, Risks and Combinations 6. "The Great Unmentionable": Exploring the Pleasures and Benefits of Ecstasy 7. Drug Use and the Meaning of Risk 8. Combining Different Substances in the Dance Scene: Enhancing Pleasure, Managing Risk, and Timing Effects Part 4: Gender, Social Context, and Ethnicity 9. Drugs, Gender, Sexuality, and Accountability in the World of Raves 10. Alcohol, Gender, and Social Context 11. Asian American Youth: Consumption, Identity, and Drugs in the Dance Scene

Geoffrey Hunt is a social and cultural anthropologist, who has had nearly thirty years' experience in planning, conducting, and managing research in the field of youth studies, and drug and alcohol research. He is a senior research scientist at the US Institute for Scientific Analysis and the Principal Investigator on three US National Institute of Health projects. He has published extensively on substance abuse, especially alcohol and drug use and evaluating community prevention and intervention programs.

Molly Moloney is a senior research associate at the Institute for Scientific Analysis. Trained as a cultural sociologist, her research focuses on gender, ethnicity, and identity within street gangs and within club-drug scenes. She has published on fatherhood among gang members, on regulating the nighttime economy in San Francisco, on club-drug use among Asian American youth, on gender theory, on global television and television critics.

Kristin Evans has a degree in sociology and psychology from the University of California at Berkeley. As a research associate at the Institute for Scientific Analysis in San Francisco she was project manager of two NIH-funded projects, on "Club Drugs and the Dance Scene" and "Asian American Youth, Drugs and the Dance Scene." Previously she worked on street gang projects. She has published a number of articles with Geoffrey Hunt on gang girls and drug use, and on drugs and the dance scene.