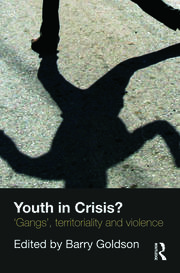 Few issues attract greater concern and censure than those that surround youth 'gangs'. Paradoxically, youth researchers have conventionally been reluctant to even use the term 'gang' but, more recently, such reluctance has receded. Indeed, it is increasingly claimed that – in particular urban 'territories' – youth gangs are commonplace, some young people are deeply immersed in violence and the carrying and use of weapons (particularly knives and firearms) is routine.

Comprizing a series of essays from leading national and international researchers, this book subjects such claims to rigorous critical scrutiny. It provides a challenging and authoritative account of complex questions pertaining to urban youth identities, crime and social order.

Youth in Crisis? provides a vital resource for researchers, educators, policy-makers and practitioners with an interest in key questions facing criminology, sociology and social policy.

Youth in Crisis by Barry Goldson  1. Perpetual Novelty: Youth, Modernity and Historical Amnesia by Geoffrey Pearson  2. Youth Gangs and Late-Victorian Society by Andrew Davies  3. 'It's just an area - everybody represents it': Exploring Young People's Territorial Behaviour in British Cities by Keith Kintrea, Jon Bennister and Jon Pickering  4. Collateral Damage: Territory and Policing in an English Gang City by Judith Aldridge, Robert Ralphs and Juanjo Medina  5. Place, Territory and Young People's Identity in the 'New' Northern Ireland by Siobhán McAlister, Phil Scraton and Deena Haydon  6. Beyond Dichotomy: Towards and Explanation of Young Women's Involvement in Violent Street Gangs by Susan A. Batchelor  7. In Search of the 'Shemale' Gangster by Tara Young  8. Young People and 'Weaponisation' by Peter Squires  9. Mercenary Territory: Are Youth Gangs Really a Problem? by John Pitts  10. Gangland Britain: Realities, Fantasies and Industry by Simon Hallsworth  11. Gangs and Transnationalism by Rob White

Barry Goldson holds the Charles Booth Chair of Social Science at the University of Liverpool where he was previously Professor of Criminology and Social Policy. He is the founding editor of Youth Justice: An International Journal.

'Goldson’s collection is the first in the UK to systematically and critically expose the "crisis discourses", amnesia and minimal knowledge that routinely surround the burgeoning "gang control industry." Anyone seriously interested in becoming better informed about the relations between young people and violence should read this book first.'
-Professor John Muncie, The Open University

'Youth in Crisis provides both a comprehensive and wide ranging discussion of young people, identity and territoriality. It is about the interplay between youth identity, young people’s social networks, and popular panics over youth gangs. The writers in this collection deepen our understanding of the historical and contemporary dynamics  surrounding youth subcultures and social groupings. They argue for a more complex and nuanced approach to the often impoverished public debate on the nature of youth gangs and violence. Youth in Crisis is a cutting-edge collection written by a group of internationally distinguished authors. I thoroughly recommend the book.'
-Professor Chris Cunneen, The Cairns Institute, James Cook University

'Taken as a whole, the collection is broad in range, lucid in structure and rich in content; and it deserves to be widely read and debated.'

'Stylistically, the book is very well laid-out, accessible and readable, with chapters succinct, to-the-point and rich in data and literature....the collection will serve as both a handy introduction to the canon for those new to the field and to stimulate further debate and research.'
-Alistair Fraser, University of Hong Kong, in the British Journal of Criminology, vol 52 iss 1