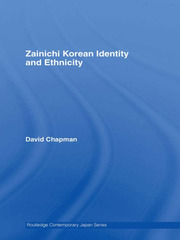 Shedding light on contemporary Japanese society in an international context, Japanese-Korean relations and modern day notions of a multicultural Japan, this book addresses the broad notions and questions of citizenship, identity, ethnicity and belonging through investigation of Japan’s Korean population (zainichi).

Despite zainichi Korean existence being integral to, and interwoven with, recent Japanese social history, the debates and discussions of the Korean community in Japan have been largely ignored. Moreover, as a post colonial context, the zainichi Korean situation has drawn scant attention and little investigation outside of Japan.

In Zainichi Korean Ethnicity and Identity David Chapman seeks to redress this balance, engaging with recent discourse from within Japan’s Korean population. By taking a close look at how exclusion, marginalisation and privilege work, the book brings insight into the mechanisms of discrimination, and how discourse not only marginalizes individuals and groups, but also how it can create social change and enhance the sense of self.

This book will be of interest to students and scholars of Asian studies and of Japanese and Korean politics, culture and society, but also to those with a broader interest in migration studies and the study of identity and ethnicity.

1. Introduction  2. Zainichi Activism and the Japanese State  3. The ‘Third Way’  4. Citizenship  5. Dealing with the Past  6. The Fourth Choice  7. Conclusion

David Chapman is coordinator of Japanese studies at the University of South Australia in Adelaide. He is presently conducting research at Waseda University in Tokyo as a Japanese Society for the Promotion of Science Postdoctoral Fellow.

'This is an excellent volume. David Chapman has given us new ways of understanding issues of identity and ethnicity that can inform not only students of Japanese Society but scholars of other diasporic populations in our world today.....Do not be deceived by the length of this book. There is much to ponder here.' - David Blake Willis, Japanese Studies

'This volume should be taken seriously as an example of the potential and limits of discourse analysis. It Illustrates much of the complex nature or Zainichi identity and the ways in which it reflects underlying issues of power and control within the Zainichi Community' - Yougmi LIM/ City University of New York, Social Science Japan Journal, October 2008

"I recommend this book to those who are interested in studies of Korea, Japan, diaspora, or postcolonialism as the book provides critical readings of nationalism and multiculturalism.  Chapman also provides insights for those who are interested in teasing out the intertwined relationship of citizenship, nationality, and ethnicity." - Haeng-ja Chung, Hamilton College, Korean Studies v32 2008

'David Chapman's Zainichi Korean Identity and Ethnicity offers a valuable in-depth look at the diverse articulations of zainichi Korean identities that appeared between the 1970s and the present' - Rumi Sakamoto, University of Auckland, New Zealand Journal of Asian Studies, December 2008