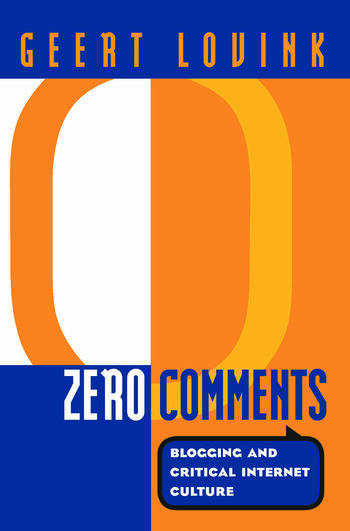 In Zero Comments, internationally renowned media theorist and 'net critic' Geert Lovink revitalizes worn out concepts about the Internet and interrogates the latest hype surrounding blogs and social network sites. In this third volume of his studies into critical Internet culture, following the influential Dark Fiber and My First Recession, Lovink develops a 'general theory of blogging.' He unpacks the ways that blogs exhibit a 'nihilist impulse' to empty out established meaning structures. Blogs, Lovink argues, are bringing about the decay of traditional broadcast media, and they are driven by an in-crowd dynamic in which social ranking is a primary concern. The lowest rung of the new Internet hierarchy are those blogs and sites that receive no user feedback or 'zero comments'.

Zero Comments also explores other important changes to Internet culture, as well, including the silent globalization of the Net in which the West is no longer the main influence behind new media culture, as countries like India, China and Brazil expand their influence and looks forward to speculate on the Net impact of organized networks, free cooperation and distributed aesthetics.

Geert Lovink is an internationally renowned media theorist and net critic. His many books include  Dark Fiber: Tracking Critical Internet Culture, Uncanny Networks: Dialogues with the Digital Intelligentsia, My First Recession: Critical Internet Culture in Transition, and The Principle of Notworking. He is a member of the Adilkno collective (Cracking the Movement, The Media Archive) and co-founder of Internet projects such as The Digital City, Nettime, Fibreculture and Incommunicado. He is founder and director of the Institute of Network Cultures (www.networkcultures.org), professor at Interactive Media (Hogeschool van Amsterdam) and associate professor at the Media & Culture department, University of Amsterdam. He was a 2005-2006 fellow at the Wissenschaftkolleg, the Berlin Institute for Advanced Study.

"Geert Lovink travels far and wide in earth space and media space and always brings back a good story and telling criticism about what is moving and shaking in the digital realms. He is our Virgil, guiding us through the heaven and hell of 'new media' --not to mention the purgatory. Highly recommended." -- McKenzie Wark, author of A Hacker Manifesto and Gamer Theory

"I often disagree with Geert Lovink, but always pay attention to him. His writing, activism, organizing, and teaching since the emergence of the Internet as a cultural phenomenon, has contributed powerfully to a sorely needed critical discussion of how digital media, new media industries, business fads relate to existing social, political, economic contexts." -- Howard Rheingold, www.rheingold.com

"Geert Lovink cuts through the cliches, cynicism, and hype, and looks at Internet culture in all its messy, contradictory reality. Nobody has thought longer and harder about the state of the Net today, and where it might be heading. Zero Comments is both richly detailed and engaged, and breathtaking in the sweep of its edgy, contrarian, and urgent vision." -- Steven Shaviro, author of Connected

"Lovink's knowledge of the technology and his critical intelligence combine to produce an exceptionally sharp presentation of current challenges and possible futures. He works at the edge of established understandings, detecting what mostly has remained undetected, no matter how huge the literature on this subject." --Saskia Sassen, author of Territory, Authority, Rights: From Medieval to Global Assemblages

"an excellent introduction to some of the most current debates within and about internet culture." --Technology and Culture