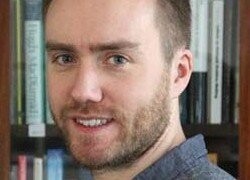 Michael's research concerns the cultural history of the Atlantic world, particularly in the long eighteenth century. It recovers the memory of Caribbean slavery in a Scottish context, and considers its implications for contemporary debates on Scottish and British identity. It also engages with concepts around archipelagos. It brings together theories around Caribbean creolization, and the Four Nations approach which re-considers ‘the British Isles’ as an ‘Atlantic Archipelago’.

It was during a Master's in Postcolonial Studies that I came across the hidden history of Scotland's role in Atlantic slavery. I was amazed that this was an area of the past which was so little discussed. During a PhD at the University of Glasgow and a postdoc at the University of Edinburgh I looked to build on the emerging historical work on Scotland's slavery past to consider how slavery impacted on Scottish culture more broadly, and how it became largely forgotten. This takes me into a lot of areas: not only Scottish cultural history, but Caribbean studies, Atlantic studies, and Memory studies, and the relationship between capitalism and slavery, slavery and modernity, etc.

One of the most inspiring things about this research has been witnessing and participating in the growing public awareness of the significance of Atlantic slavery in Scotland since around 2007. There have been novels, television documentaries, museum exhibitions, photography exhibits, art gallery presentations, theatre and street performances, an Empire cafe, public talks, walking tours, and gigs. I even made my stage debut in one theatre performance- Lou Prendergast's 'Fifty Shades of Black'.