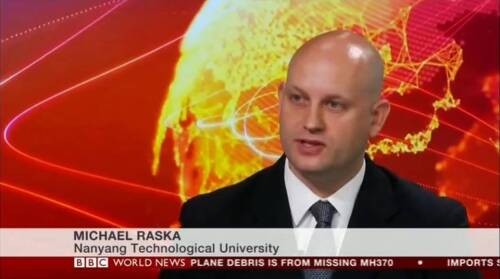 Dr Michael Raska is Assistant Professor and Coordinator of the Military Transformations Program at the S. Rajaratnam School of International Studies, Nanyang Technological University in Singapore. His research interests focus on East Asian security and defense, including theoretical and policy-oriented aspects of military innovation, force modernization, information conflicts and cyberwarfare.

Dr Michael Raska is Assistant Professor in the Military Transformations Program at the S. Rajaratnam School of International Studies, Nanyang Technological University in Singapore. His research interests focus on East Asian security and defense issues, including theoretical and policy-oriented aspects of military innovation, force modernization trajectories, information and cyberwarfare.  He is the author of "Military Innovation and Small States: Creating Reverse Asymmetry" (Routledge, 2015) and co-editor of "Security, Strategy, and Military Change in the 21st Century: Crossregional Perspectives (Routledge, 2015).  His has published in academic as well as professional journals such as the Korea Journal of Defense Analysis, Pointer-Journal of Singapore Armed Forces, and Asian Journal of Public Affairs. He has contributed chapters to edited volumes for the Norwegian Institute of Defense Studies; the Project on the Study of Innovation and Technology in China at the Institute on Global Conflict and Cooperation, University of California San Diego, and the Strategic Studies Institute, U.S. Army War College.  His strategic assessments have been published by the National Interest, Project Syndicate, Defense News, The Diplomat, East Asia Forum, RUSI Newsbrief, and many newspapers around the world. He is a frequent commentator on East Asian security issues for the CNBC, BBC World News, Al-Jazeera News, Channel News Asia, and other networks.

Dr Raska has previously taught at the Goh Keng Swee Command and Staff College (SAF Campaign and War Studies Course) and the Lee Kuan Yew School of Public Policy (International Security). His research experiences include visiting fellowships at Yonsei University, Pacific Forum CSIS, and Hebrew University of Jerusalem. He is an alumnus of the Columbia / Cornell University Summer Workshop on Analysis of Military Operations and Strategy (SWAMOS 2012), the Philip Merrill Center for Strategic Studies Workshop at Basin Harbor (2013), and the Hertog Summer Study Program (2014). He holds a B.A. in international studies from Missouri Southern State University (2000), an M.A. in international relations from Yonsei University (2002), and a Ph.D. in public policy (2012) from the National University of Singapore, where he was a recipient of the NUS President’s Graduate Fellowship. 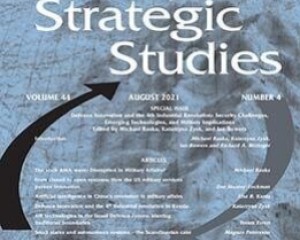 This paper argues that a new ‘artificial intelligence-driven RMA’ wave differs in the political, strategic, technological, and operational diffusion paths and patterns. While the AI-RMA may affect select countries and regions disproportionately, its technological advances coupled with an ongoing strategic competition is sufficiently broad to stipulate significant military changes across geopolitical lines.