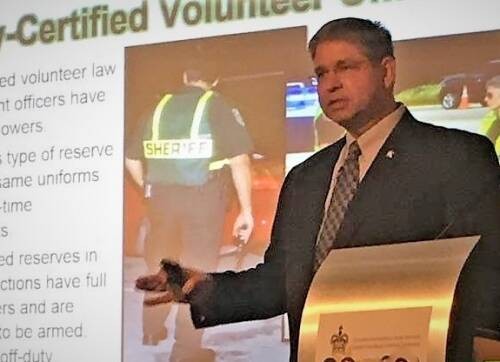 Ross Wolf is Associate Provost and Professor of Criminal Justice at the University of Central Florida. He holds a doctorate degree in Higher Education Administration and Education Leadership, and has over thirty years of experience as a law enforcement officer, serving as a member of patrol, criminal investigations, specialized patrol, and a plainclothes tactical unit.

Dr. Ross Wolf serves as Associate Provost and Professor of Criminal Justice at the University of Central Florida. Ross has over thirty years of experience as a full-time and reserve deputy, and currently serves as Reserve Chief Deputy for the Orange County (Florida) Sheriff's Office.  He has served in patrol, as a Field Training Officer, specialized patrol, and criminal investigations as a detective. He was appointed to and serves on the International Association of Chiefs of Police (IACP) Police Administration Committee, and on the National Sheriffs' Association (NSA) Outreach Committee and Reserve Law Enforcement Subcommittee.  He is a Certified Homeland Protection Professional (CHPP) and Certified Volunteer Policing Leader (CVPL), and in 2017 was named Visiting Fellow by the University of Northampton’s Institute for Public Safety, Crime, and Justice in the United Kingdom. He is also a Fellow of the American Council on Education (2022-23).  He has authored over fifty professional articles, refereed articles, book chapters, and books on police interviewing, police administration and management, reserve and volunteer policing, police use of force, tourism policing, and international policing.  In addition to his work with police agencies throughout the United States, he has worked with the police in the Caribbean, the United Kingdom, Russia, Hong Kong, Saudi Arabia, Dubai, and Singapore. In addition to other law enforcement awards, he has received the Orange County Sheriff's Office Administrative Excellence Award, Sheriff's Citation, and Distinguished Service Award.  He has been presented with the United States "Daily Point of Light" Award, the National Sheriffs' Association "Medal of Merit" Award, and the US Presidential "Lifetime Call to Service” Award for his work with volunteer and reserve policing. 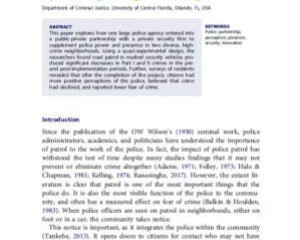 This paper explores how one large police agency entered into a public-private partnership with a private security firm to supplement police power and presence in two diverse, high-crime neighborhoods. Using a quasi-experimental design, the researchers found road patrol in marked security vehicles produced significant decreases in Part I and II crimes in the pre-and post-implementation periods. 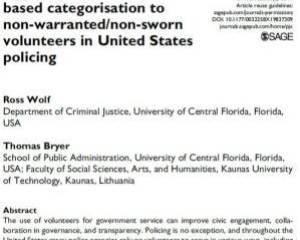 The use of volunteers for government service can improve civic engagement, collaboration in governance, and transparency. Policing is no exception, and throughout the United States many police agencies rely on volunteers to serve in various ways, including observational patrols, investigations, administrative support, chaplains, police explorer programs, and search and rescue teams. This manuscript focuses on the varied ways that citizens participate in policing in non-warranted/non-sworn roles. 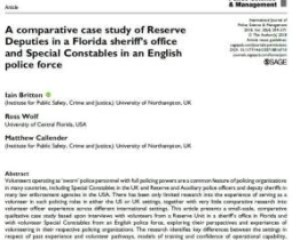 Volunteers operating as ‘sworn’ police personnel with full policing powers are a common feature of policing organizations in many countries, but there is limited research into the experience of serving as a volunteer in such policing roles in either the US or UK settings. This article presents a small-scale, comparative qualitative case study with volunteers from a Reserve Unit in a sheriff’s office in Florida and with volunteer Special Constables from an English police force. 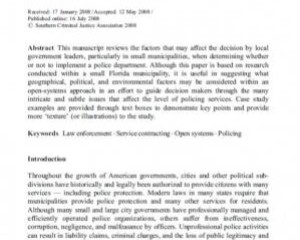 An Analysis of Factors Affecting the Implementation of Small Municipal Police Agencies: An Open-Systems Approach

This manuscript reviews the factors that may affect the decision by local government leaders, particularly in small municipalities, when determining whether or not to implement a police department. This paper suggests what geographical, political, and environmental factors may be considered within an open-systems approach in an effort to guide decision makers through the many intricate and subtle issues that affect the level of policing services. 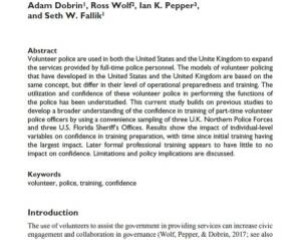 An exploratory international comparison of professional confidence in volunteer policing

Police volunteers are an important asset to communities and policing agencies but have been relatively understudied. Similar models of police volunteers have developed in the United States and the United Kingdom but these differ in the level of their preparedness and training. This current study utilises vignettes to examine the confidence of volunteer police officers from two agencies, one in the US and one in the UK. 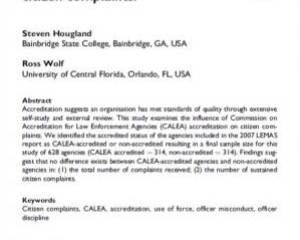 Accreditation suggests an organization has met standards of quality through extensive self-study and external review. This study examines the influence of Commission on Accreditation for Law Enforcement Agencies (CALEA) accreditation on citizen complaints. 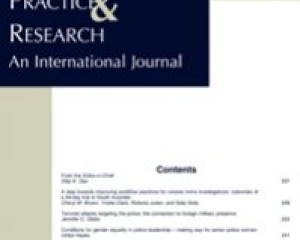 Utilization and satisfaction of volunteer law enforcement officers in the office of the American sheriff: An exploratory national study

Many government organizations utilize volunteers to enhance services, and volunteers have been used in law enforcement agencies for a variety of functions.However, volunteers in American policing are a largely under-studied part of the criminal justice system. This current paper examines the utilization of volunteer reserves, auxiliaries, and special deputies in the office of the American sheriff. 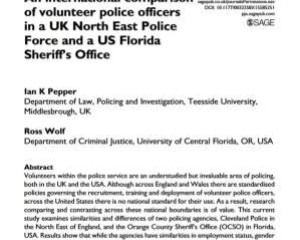 Volunteering to serve: An international comparison of volunteer police officers in a UK North East Police Force and a US Florida Sheriff’s Office

Volunteers within the police service are an understudied but invaluable area of policing, both in the UK and the USA. Although across England and Wales there are standardised policies governing the recruitment, training and deployment of volunteer police officers, across the United States there is no national standard for their use. As a result, research comparing and contrasting across these national boundaries is of value. 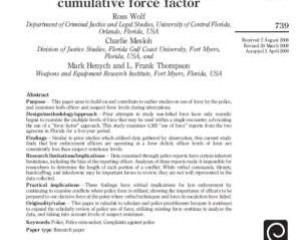 Police use of force and the cumulative force factor

This paper aims to build on and contribute to earlier studies on use of force by the police, and examines both officer and suspect force levels during altercations.These findings have critical implications for law enforcement by continuing to examine conflicts where police force is utilized, showing the importance of officers to be prepared to use decisive force at the point where verbal techniques and force de-escalation have failed.