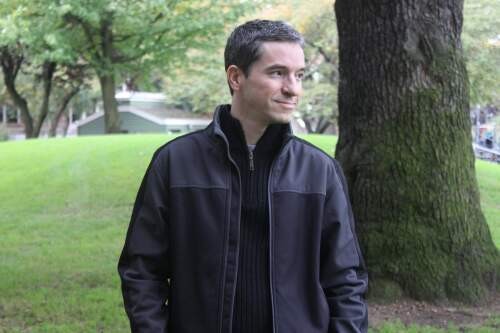 Dustin Morrow is an award-winning filmmaker, author, programmer and educator. As a media artist, his works frequently explore issues of and relationships between landscape/space and personal, communal and cultural identities; the relationship between music and the moving image; intersections of traditional cinema and new media; the actor-director relationship; and genre filmmaking.

Dustin Morrow is an award-winning filmmaker, author, programmer and educator. As a media artist, his works frequently explore issues of and relationships between landscape/space and personal, communal and cultural identities; the relationship between music and the moving image; intersections of traditional cinema and new media; the actor-director relationship; and genre filmmaking. He was born and raised in western Illinois, and received his MFA from the Department of Cinematic Arts at the University of Iowa in 2003. He is currently an Assistant Professor at Portland State University in Portland, OR, where he teaches courses in digital cinema production and film studies. He previously taught at Temple University in Philadelphia, Monmouth College in Illinois, and at the University of Iowa in Iowa City. He was the Interim Head of Film at Portland State University for the 2013-14 school year.

Professor Morrow’s films have won numerous awards and been shown in venues around the world. He has written about film and pop culture for a host of publications, and his photographs have been featured in a number of exhibition spaces. Before re-entering academia, Morrow was an editor and director of short-form projects and series television in Los Angeles, for such clients as MTV and the Discovery Channel, and such filmmakers as Spike Jonze and Steven Soderbergh. He continues to operate his own independent production company, Little Swan Pictures, for which recent projects have taken him as far away as the Aleutian Sea.

Among his recent works are a feature-film contemporary musical called Everything Went Down, which was the subject of a TED Talk and has screened at film festivals across America, taken Best Film honors at five film festivals, and was a huge success on the streaming service Hulu. Other recent projects include Ground London, an experimental documentary short exploring the British capital’s urban landscapes, which screened and won awards at festivals worldwide and was curated in Ohio State University’s Journal of Short Film; an anthology of short films examining Irish identity entitled Firinne: Searching for Ireland, which has screened in festivals and museums in the U.S. and Ireland; The Marriage of Figaro, a production of the classic opera produced for Comcast Television; Laptop, a short documentary about electronic music which premiered at M.I.T. in Cambridge; and Film versus Film, a cinema discussion forum produced as both a television series and a popular web series. In February 2013, Focal Press published his textbook, Producing for TV and New Media. Mr. Morrow is currently writing a book about stage and screen acting with Oscar/Tony/Grammy-nominee and Golden Globe winner Kathleen Turner. Professor Morrow has received grants for his work totaling more than half a million dollars.

Mr. Morrow was the Director of the Greenfield Youth Film Festival in Philadelphia for three years. The Greenfield Youth Film Festival is among the largest youth-centered film education programs in the world. Presently he is the Founder/Executive Director of the Portland Music Video Festival, currently in its third year, and one of the only festivals in the country dedicated exclusively to the art and craft of music videos. He has also programmed for the Hollywood Theater in Portland, the Portland Film Festival, and the Reel Music Festival. He is an in-demand speaker at conferences, film festivals and workshops nationwide about issues related to film production and scholarship.

A passionate advocate of study-away education, Professor Morrow has during his summers run programs in London and Dublin, as well as taught documentary filmmaking in Northern Ireland. At Temple University, he authored a new certificate program in Globalization and Intercultural Communication. He is currently developing a film-centered program that will run during the summer in New York City, and he directed in 2015 and continues to consult on the University of Oregon’s summer program in Dublin.

Learn more about Professor Morrow and his work at www.dustinmorrow.com.