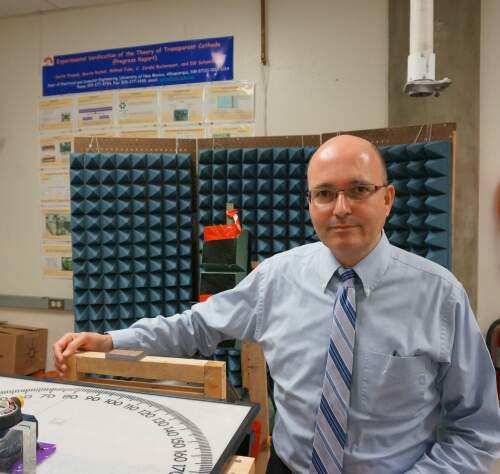 Edl Schamiloglu received the BS and MS degrees from Columbia University, NY, in 1979 and 1981, respectively. He received the PhD degree from Cornell University, Ithaca, NY, in 1988. He joined the University of New Mexico as Assistant Professor in 1988 and he is currently Distinguished Professor of Electrical and Computer. He has coauthored over 125 refereed journal papers, over 200 reviewed conference papers, and 6 patents. He is PI on over $26M of contracts and grants expenditured at UNM.

Edl Schamiloglu was born in The Bronx, NY in 1959. He received the B.S. degree in Applied Physics and Nuclear Engineering from Columbia University, NY, in 1979; he received the M.S. degree in Plasma Physics from Columbia University in 1981. He received the Ph.D. degree in Engineering (minor in Mathematics) from Cornell University, Ithaca, NY, in 1988 (dissertation advisor David A Hammer, J.C. Ward Jr. Professor of Nuclear Energy Engineering). He joined the University of New Mexico (UNM) as Assistant Professor in 1988 and he is currently Distinguished Professor of Electrical and Computer Engineering and directs the Pulsed Power, Beams, and Microwaves Laboratory. He also holds an appointment in the Department of Electrical and Computer Engineering, National University of Singapore. He lectured at the U.S. Particle Accelerator School, at Harvard University in 1990, and at MIT in 1997. He coedited Advances in High Power Microwave Sources and Technologies (Piscataway, NJ: IEEE, 2001) (with R.J. Barker) and he has coauthored High Power Microwaves, 2nd Ed. (Taylor & Francis, New York, NY, 2007; 3rd Ed. to be released November 22, 2015) (with J. Benford and J. Swegle). He has coauthored over 125 refereed journal papers, over 200 reviewed conference papers, and 6 patents. His publications have been cited over 4100 times and his h-index is 28. He has been PI on over $26 M of contracts and grants expenditured at UNM.

Dr. Schamiloglu has received the Sandia National Laboratories Research Excellence Award as part of the Delphi/Minerva team in 1991, the UNM School of Engineering Research Excellence Award twice (junior faculty in 1992 and senior faculty in 2001), the titles of UNM Regents’ Lecturer (1996) and Gardner-Zemke Professor (2000), and the Lawton-Ellis Award in 2004. He is a Fellow of the IEEE, an EMP Fellow (sponsored by the Summa Foundation), and an Associate Editor of JEMWA (J Electromagnetic Waves and Applications). He was the General Chair of the IEEE PPPS-2007 Conference in Albuquerque, NM in June 2007 and AMEREM-2014 in Albuquerque, NM, July 2014. He was selected the Outstanding Engineering Educator by the IEEE Albuquerque Section in 2008. He is a recipient of a 2011, 2012, and a 2013 UNM.STC Creativity Award. He was selected as a University of New Mexico Academic Leadership Fellow for 2013-2015. He recently was awarded the 2013 IEEE Nuclear and Plasma Sciences Society’s Richard F. Shea Distinguished Member Award, the 2014 IEC (International Electrotechnical Comission) 1906 Award Recognizing an Expert’s Exceptional Current Achievements, and the 2015 IEEE NPSS PPST Committee’s Peter Haas Award. He was promoted to Distinguished Professor in 2014.