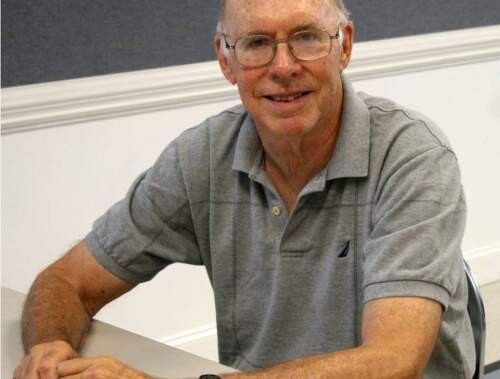 Dr Haugan is semi-retired and lives in the Northern Neck of Virginia with his wife and cat. He is active in the company which manages the Milk Drug Database for the FDA and he provides consulting services for project management to selected companies in Israel and the US. He has authored 7 books on project management and two on sustainability topics. He is currently the Virginia Northern Neck Group Leader for the Citizens Climate Lobby

As a government official in the Senior Executive Service he has worked at a management level on major aircraft, passenger rail and pipeline projects and was Director of the Transportation Programs Bureau for the Research and Special Projects Administration of the US Department of Transportation. In the latter role he was responsible for Emergency Transportation, University Research, and Transportation Security; and funding and overseeing the transportation research of the DOT including partially funding the National Academy of Sciences and Transportation Research Board of the National Research Foundation.

He has worked with over 50 private and public sector organizations on a wide range of project management and training engagements.  He has completed several consulting assignments in the last year with Cyclone Aviation Products, Ltd. and Yoland Corporation of Israel for work for the U.S. DOD, and is currently working with the Department of Homeland Security on a major IT project in Washington, DC, and with Israel Military Industries, Ltd.,on a major program for the U.S. Army Tank Command . His company also is involved in a milk safety project for the Food and Drug Administration.

He performed volunteer project management work for two Northumberland County sewer projects in Reedville and Callao, worked with the County Administrator to prepare a County emergency preparedness analysis after Hurricane Isabel, and was the lead in rewriting the 2006 County Comprehensive Plan. He served two terms on the Northumberland Library Board and was the President of Betz Landing Homeowners Association for the first seven years of the development. He is currently on the Northumberland Association for Progressive Stewardship, NAPS, Board as well as the Northern Neck Family YMCA Board of Management.

His recent book “The New Triple Constraints for Sustainable Projects, Programs and Portfolios” is a major departure from the previous books and addresses population increases, climate change and energy resources. It is intended to provide a basic resource and methodology for planning programs and portfolios for the current and upcoming decades. It was published in July 2012 by CRC Press. He also has a contract for a related  follow-on book on sustainability issues for program managers.

Dr. Haugan has led three courses for the Rappahannock Institute for Lifeline Learning, RILL. The first in the fall of 2005 was titled: "Development of Human Societies: Lessons for the Northern Neck" with major emphasis on current problems with potential shortages in energy and water resources. The second course, given in the fall of 2006 was an extension of the first and titled: "Oil, Energy and Global Warming". It recognized the indivisibility of the three topics, presented current theories and discussed our role in the Northern Neck and what actions were warranted. The third course for RILL was titled: Fact, Fiction and the Future with Global Warming. In this course he helped the class sort out all the various claims and theories with regard to global warming phenomena and its current and projected impact on our lives. Like all his programs ended with a discussion of our responsibilities to help protect our planet. These courses provided the basis for the latest book. He currently is scheduled to put on a course in the Spring 2013 semester based on his current book.

He and his wife Susan and cat Sasha currently live in the Northern Neck on the Great Wicomico River at Betz Landing in Heathsville, Virginia. His children all live in the greater DC area.