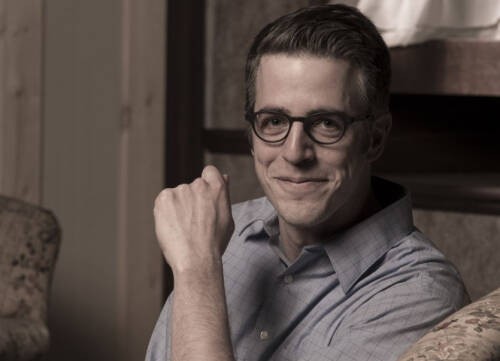 Matt Fotis is an Associate Professor and Chair of the Theatre Department at Albright College where he teaches comedy studies, acting, and writing for performance. He is the author of Satire & The State: Sketch Comedy and the Presidency, Long Form Improvisation and American Comedy: The Harold, and The Comedy Improv Handbook.

Matt Fotis is an Associate Professor and Chair of the Theatre Department at Albright College where he teaches comedy studies, acting, and writing for performance. Additionally he serves as the advisor/artistic director for Albright Improv, Albright Sketch Society, and The Children's Theatre of Albright. He received his PhD in Theatre from the University of Missouri, where he was a Raymond White Dissertation Fellow. He holds a Master of Arts from Illinois State University where he received the James L. Fisher Outstanding Thesis Award from the College of Fine Arts, and a BA from Monmouth College. He is the author of Long Form Improvisation and American Comedy: The Harold, which garnered him The Dr. Henry P. and M. Page Laughlin Distinguished Faculty Award for Research, and The Comedy Improv Handbook. In addition he has published or presented on various topics, including improvisational theatre, new play development, political theatre, arts administration, solo-performance, folklore studies, popular culture studies and more. His work has appeared in Theatre Journal, Theatre Topics, The Journal of American Drama & Theatre, The Encyclopedia of Humor Studies, The Encyclopedia of American Studies, and MLB.com among others. He has won numerous awards in various fields and pursuits, but balances these accolades with his social awkwardness.

But There's More...
He is also an award winning playwright whose plays have seen stages from coast to coast. His work has been presented or developed at such places as The Lark, The Playwrights' Center, The Kennedy Center, The Great Plains Theatre Conference, Emerging Artists Theatre, City Theatre, Ten Grand Productions, MATC Dramatists Play Lab, and many others. He is a former Playwrights' Center Core Apprentice and has received grants from the Illinois Arts Council and the Albright Creative Research Experience. His plays have won The Mark Twain Prize for Comic Playwriting, UCM's Theatre for Young Audiences National Playwriting Competition, and The Sonoma County Repertory Theatre’s SCRipts Festival. He's been a Finalist for the Heideman Award, The David Mark Cohen Award, and a National Finalist for the KC/ACTF National Ten Minute Play Award, as well as a National Finalist for the John Cauble Outstanding Short Play Award. He is the first playwright in the history of KC/ACTF to have three different plays represented at the National Festival in three different categories. His works have been published by Original Works Publishing, JAC Publishing & Promotions, Smith & Kraus, and Meriwether Press.

Matt Fotis is also the advisor and coach for Albright Improv (Less Than or Equal To Improvisational Comedy Troupe & Soviet Purgatory), as well as the founder and former artistic director for MU Improv. He has been performing and teaching improv for nearly twenty years, and has studied at iO Chicago and The Brave New Workshop. At some point in time he has been a member of Joan McNeil, Anvilhead Theatre, Scotch Tape, Improv Mafia, Fingergun (Critic's Pick Star Tribune), and The Jerry Azumah Players (Critic's Pick Pioneer Press). He was also the head writer and director for the critically acclaimed sketch shows Requiem for a Department Store, or how Jesus Taught me to Shop at Macy's and No-EL, or how The BlagojeGrinch Stole Christmas - which were recommended by the Chicago Sun-Times, Chicago Tribune, Chicago Magazine, MetroMix, RedEye, The Daily Herald, and New City Chicago.