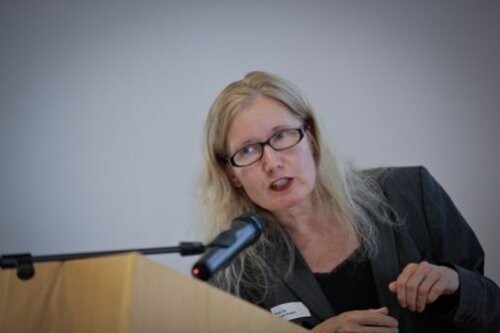 Susan Hogan is Professor of Cultural Studies and Art Therapy and a Professorial Fellow at IMH, Notts. Professor Hogan has research interests in the history of medicine. She has written extensively on the relationship between the arts & insanity and the role of the arts in rehabilitation. She is also very interested in the treatment of women within psychiatry. She is currently conducting research with several partner institutions.

Susan Hogan has a BA Degree in fine art, a post-graduate diploma in art therapy, a Master’s Degree in Arts Administration (Arts Policy & Management), and a further Master’s Degree in Social Science Research Methods (Social Policy & Sociology, specialising in visual methods). Her Ph.D. was in Cultural History from Aberdeen University, Scotland, looked at the history of ideas around madness and the use of the arts. Susan has also studied art history at Sydney University. Additionally, Susan undertook further training in group-psychoanalytic psychotherapy. She served for six years as a Health Professions Council (U.K.) ‘visitor’ (now HCPC). She is a former Vice-President of ANATA (Australian National Art Therapy Association, now ANZATA), and has twice served as a regional co-ordinator for the British Association of Art Therapists (BAAT). She has been instrumental in setting up several art therapy training courses, and also courses in dance-movement and drama therapy.

Professor Hogan qualified as an art therapist in 1985. She has a particular interest in group-work and experiential learning, following early employment with Peter Edwards M.D., an exceptional psychiatrist who had worked with Maxwell Jones, a psychiatrist who is associated with the ‘therapeutic community movement’ in Britain. She is currently Professor in Cultural Studies & Art Therapy in which role for many years she facilitated experiential workshops and the closed-group component of the art therapy training. This closed-group training has been based on the group-interactive approach described by Professor Diane Waller  (summarised in this book). Now most of her time is spent supervising research at MA & PhD levels, and conducting research.

Susan has also undertaken work with pregnant women and women who have recently given birth, offering art therapy groups to give support to women, and an opportunity for them to explore their changed sense of self-identity and sexuality as a result of pregnancy and motherhood. She has published extensively on this subject.

Professor Hogan is currently conducting research with several partner institutions, including co-researching women’s experience of ageing with sociologists from the University of Sheffield using visual research methods. She is a Professorial Fellow of the Institute of Mental Health of the University of Nottingham. Additional to all the above, she has also published a number of both scholarly and polemical papers on women and theories of insanity.

Particularly influenced by the anthropological work of her late mother-in-law, Professor Dame Mary Douglas, Hogan’s work has been innovative in its application of social anthropological and sociological ideas to art therapy; also distinctive is her unwavering challenge to reductive psychological theorising.