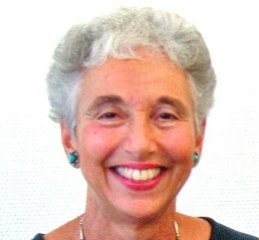 I am a licensed psychologist, child and adult psychoanalyst, and board-certified art therapist. A past President and Honorary Life Member of the American Art Therapy Association, I’ve written seven books and created thirteen films. I am also on the faculties of the Psychiatry Department at the University of Pittsburgh and the Pittsburgh Psychoanalytic Center, and have presented at many conferences in the U.S. and abroad. I am currently working on the creation of a Teaching Film Library.

I had always loved art, so I majored in it at Wellesley, and decided to be a teacher because I liked working with people. I went to Harvard for a master’s degree in education, and taught art until my first two children were born. In 1963, while volunteering to help with a research project on the psychology of children’s art for the program in Child Development at Pitt, I stumbled into art therapy, which became my life’s work. I had loved teaching, but when faced with the creative and intellectual challenge of doing art therapy with schizophrenic children, I felt like the Ugly Duckling finding the swans in Hans Christian Anderson’s fairy tale; this work just “fit.”
In 1964 I met Fred Rogers who was using puppets with the children at the child study center where we had the same mentor, a child psychologist, and were also lucky to be sometimes supervised by Erik Erikson. When Fred started his PBS television program in 1967, “Mister Rogers’ Neighborhood,” he asked me to be the Art Lady, so I was in a monthly unscripted segment for 3 years. When I told him that no one would believe how creative the multiply disabled blind children I was seeing were, he suggested that I make my first film, another way of teaching that has continued to this day.
Later, working at a clinic and running a creative & expressive arts therapy program in a psychiatric hospital, I realized that I needed to understand more, and enrolled in the Pittsburgh Psychoanalytic Institute, training in adult and child analysis. I also decided to learn about non-Freudian approaches, and was lucky to find a competency-based PhD program at the University of Pittsburgh which allowed me to fill in many gaps in my learning. My dissertation became my first book, Child Art Therapy, which has been in print since 1978 and is now in its 3rd edition.  The doctorate also allowed me to take the exam to be licensed as a psychologist (1979).
When the American Art Therapy Association (AATA) was founded in 1970, I became involved, serving on the board for six years, two as president, later named an honorary life member (HLM) as well as a Board Certified Art Therapist (ATR-BC). During my 53 years in art therapy, I have worked with people of all ages and conditions in a wide variety of settings, including private practice and in the community. As a faculty member of the department of Psychiatry at Pitt and the Pittsburgh Psychoanalytic Center, as well as lecturing across the U.S. and abroad, I have had the pleasure of teaching and supervising students in many fields, including not only art therapy but also psychology, social work, counseling, and psychology.

Art therapy, Expressive arts therapy (combining modalities like art and drama)
Psychoanalysis (completed the full training in both adult and child analysis which took 10 years; practiced analysis with all ages incorporating art)
Many research studies in collaboration with others, most published in journals or proceedings

Painting, drawing, sculpting with clay
Filmmaking, starting with 16mm and ultimately using computer (Final Cut Pro)
Tap dancing ages 62-78 (had to give it up recently due to neuropathy and balance problems; loved it)
Seeing movies, concerts, plays (online, on TV, live if possible)
Reading books, lately biography is top on my list

Art Therapy Has Many Faces - with Subtitles in 12 languages

An overview of the field of art therapy with subtitles in English as well as German, Greek, Hebrew, Italian, Japanese, Korean, Portuguese, Russian, and Spanish. A version with subtitles in simple and complex Chinese was produced by Dr. Liona Lin for the Taiwan Institute of Psychotherapy, leading to the development of this video.

This film is about art therapy pioneers, educators and practitioners from around the world. Created from interviews, photos, news broadcasts, and archival footage contributed by colleagues, it demonstrates the power of art as a universal language for healing in all cultures. It is the story of the global development of art therapy, so that more people in more places can benefit from the healing power of art.

This trailer describes my most recent film about Mister Rogers' creative talents and his extraordinary ability to make psychological concepts accessible to people of all ages. As the Art Lady on the first three years of the show, I learned the power of the media and it was Fred Rogers who suggested that I make my first film about blind children.

Children and the Arts: A Film About Growing

This film shows activities in music, dance, art, and drama in a program for children at risk for the development of emotional problems. There is an emphasis on the mental health values common to all of the art forms in therapy. The naturalness of engaging in creative activities, the need for practice in order to achieve control, and the feeling of well-being that accompanies the sense of mastery are emphasized. The film illustrates how the arts help children grow and develop self-esteem.

BREAKTHROUGH: Art, Analysis & the Liberation of the Creative Spirit

This film captures the intimate experience of 8 artists who had psychoanalytic therapy. It demonstrates the growth and freedom made possible by facing the pain brought into awareness by both analysis and creation. The film shows how the combination of analytic therapy and creative work liberated them, facilitating personal growth and creative freedom.

This film notes why art and drama are helpful in assessment and treatment, as well as essential conditions for enhancing comfort and creativity in clinical work. After showing simple basic art and drama materials, a variety of techniques are demonstrated by experienced therapists for work with individuals, couples, families, and groups.

"Yes You Can!" Art-Centered Therapy for People with Disabilities

This film is about courage, commitment, and creative coping. It tells the story of Mickie McGraw, who overcame polio at age 11 to become an art therapy pioneer. With Dr. George Streeter, a psychoanalyst who was also an artist, she co-founded and ran an Art Therapy Studio in a rehabilitation hospital. The film tells the story of both individuals and of the unique program they developed a half century ago

This film, made in collaboration with the American Art Therapy Association, is an inspiring introduction to the many ways in which art therapy can help older adults to live more satisfying lives and to work though the issues involved in aging. It has been useful not only for training art therapists and informing lawmakers, but also as a way to promote art therapy programs in settings where older adults are being helped.

The Green Creature Within: Art & Drama in Group Psychotherapy

This film, made with my co-therapists Ellie Irwin (drama) and Bill Borrero (playwrite and child psychiatrist) tells the story of an adolescent therapy group that met for two years in an outpatient clinic. Using film and slides shot by the group members themselves, we wanted to show how best to run such a group. It contains two vivid case studies.

"We'll Show You What We're Gonna Do!" Art Therapy with Blind Children

My first film, suggested by Fred Rogers, about the creative capacities of blind children with multiple disabilities. They showed amazing creativity, astounding those who knew them. The music for the film was improvised by a blind saxophonist (Eric Kloss) playing to the piano accompaniment by his friend, Carol Morgan. It was a wonderful experience and led me to see film as the way to tell and teach about art therapy, amplifying what I wrote in my books.

This video tells about my filmmaking history and that of the nonprofit I co-founded with my drama therapy colleague, Dr. Eleanor Irwin, in 1985. During its 30 years, Expressive Media (EMI) has produced 12 DVD's which include 20 finished films and excerpts from others in related areas,

Art Therapy Has Many Faces

This film is an overview of the field of art therapy and was made to accompany the books, Art Therapy: An Introduction (1999) and Introduction to Art Therapy: Sources & Resources (2010), both published by Routledge.