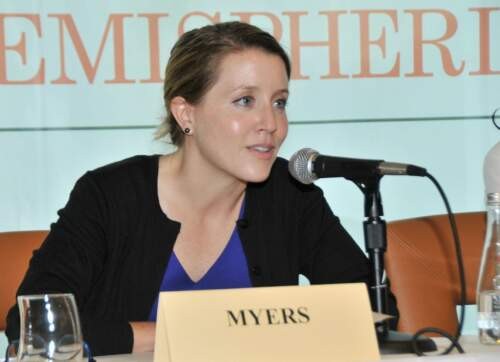 In addition to maintaining the Dialogue’s China and Latin America and 美洲对话 blogs, Myers has published numerous articles on Chinese leadership dynamics, international capital flows, Chinese agricultural policy, and Asia-Latin America relations, among other topics. She recently published a chapter on China-Latin America relations in the Routledge Handbook of Latin America in the World and contributed to the OECD’s 2016 Latin America Economic Outlook. The Political Economy of China-Latin America Relations and The Changing Currents of Trans-Pacific Integration: China, the TPP, and Beyond, her co-edited volumes with Dr. Carol Wise and Dr. Adrian Hearn, respectively, were published in 2016.  Myers is also regularly featured in major domestic and international media, including the Economist, Financial Times, New York Times, Wall Street Journal, El Comercio, Folha de São Paulo, CNN en Español, CCTV, and Voice of America. She was called to testify before the House Committee on Foreign Affairs in 2015.

Before arriving at the Dialogue, Myers worked as a Latin America analyst and China analyst for the US Department of Defense, during which time she was deployed with the US Navy in support of Partnership of the Americas. Myers also worked as a senior China analyst for Science Applications International Corporation, a consultant for the Inter-American Development Bank, and for Fauquier County Schools, where she developed the county’s first Mandarin language program. Myers received her bachelor’s degree from the University of Virginia and conducted her graduate work at The George Washington University, Zhejiang University of Technology, and the Johns Hopkins University/Nanjing University Center for Chinese-American Studies. Myers is a Council on Foreign Relations term member. She received a Freeman fellowship for China studies in 2010 and a Fulbright Specialist grant in 2014 to research China-Colombia relations in Bogotá. 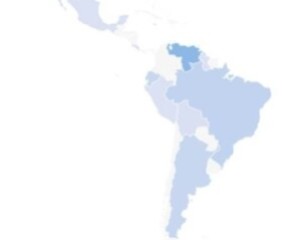