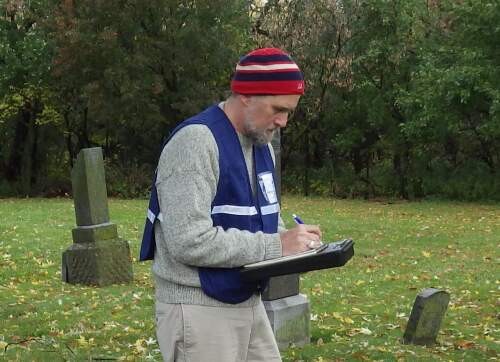 Professor of Anthropology
Lawrence University and the Santa Fe Institute

I am an archaeologist with more than 30 years experience doing and teaching archaeology. My work has focused primarily on archaeological survey, often using remote sensing equipment. I have conducted archaeological work on every continent, although most of my work has been in Syria and the Midwest. I am currently working with Lawrence University students helping families and local historic preservation groups to identify unmarked graves in pioneer cemeteries.

I came to archaeology through a rather circuitous route.  My undergraduate degree is in English, but somewhere along the line I found anthropology’s social scientific approach to understanding humans more appealing than the humanistic approach he had learned as an English major. I started graduate school in anthropology, and undertook an ethnohistorical study of the relationship between Jesuit missionaries and Native American peoples for my master’s degree.  While doing that study I realized that I had to study archaeology before I could understand the cultural interactions experienced by Native Americans before their contact with the Jesuits.

I did my PhD research on the prehistoric Mississippian cultures of the eastern United States, and found that interactions between groups were common and had been shaping Native American cultures for centuries. Native Americans approached contact with the Jesuits simply as another in a long string of intercultural exchanges. I also found that relatively little research had been done on Native American interactions and decided that comparative research was a good place to begin examining the topic. I have been pursuing comparative archaeological research ever since.

During my graduate education I was lucky enough to learn the specialized methods of archaeological survey, particularly those done using remote sensing instruments.  This specialization has allowed me to travel all over the world to conduct surveys and to learn about the amazing diversity of the archaeological record.

I am currently a professor of anthropology and museum studies at Lawrence University in Appleton, Wisconsin where I teach a variety of courses in archaeology and museum studies to undergraduate students.  I am also an external professor at the Santa Fe Institute in Santa Fe, New Mexico, where I work on comparative approaches to understanding cultural evolution.  Finally, I am a research associate for the Human Relations Area Files, which is the primary institution supporting comparative research in the social sciences.

And I continue to do archaeological research.  Currently my students and I are busy conducting surveys of pioneer cemeteries using remote sensing instruments to locate unmarked graves in order to preserve them.

My research focuses on the comparative study of cultural evolution.  I want to know why and how we changed from living in small, autonomous groups 10,000 years ago to living in enormous, highly centralized societies today.  I also specialize in archaeological survey methods, particularly those employing remote sensing instruments.

I am a voracious reader, and I like to take a classic author (like Dickens or Faulkner) and read through their entire corpus of work.  I also love nautical adventure novels like those of Patrick O'Brien and William Clark Russell, perhaps because I love sailing.  I am an avid musician, and build my own string instruments.

What Can You Do With A Degree In Anthropology?

What can you do with a degree in anthropology? The Famous Dead Germans give an answer.