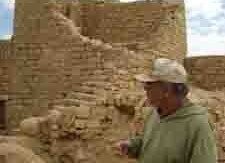 Steve Rosen holds the Canada Chair in Near Eastern Archaeology at Ben-Gurion University. His work has focused on two main areas, the continued use of chipped stone tools after the introduction of metallurgy, and the archaeology of desert mobile pastoralism. In general, he is trained as a prehistorian and most of his field work has been conducted in the Negev, the southern desert of Israel.

Steve Rosen completed his Bachelor’s degree in anthropology and mathematics at the University of California at Berkeley, writing his honor’s thesis on The Magnetometer Survey at Monte Leone, a Late Bronze Age Site in Northern Italy (1975), under the supervision of Glyn Isaac and based on field work with Albert Ammerman in northern Italy. He did his graduate work at the University of Chicago, writing an MA thesis entitled A Study of Megafauna from the Levantine Paleolithic (1978). His doctoral dissertation, Lithics in the Bronze and Iron Ages in Israe (1983), was supervised by Karl W. Butzer. During the conduct of his doctoral research he joined the Negev Emergency Survey in 1980, working for the Survey until 1988 when he joined the academic faculty of Ben-Gurion University of the Negev.
At Ben-Gurion University he has served as head of the archaeological division, chair of the department of Bible, Archaeology, and Ancient Near East, director of the Humphrey Institute for Social Research, academic director of the Office of International Academic Affairs, assistant dean of the Kreitman School for Advanced Studies, deputy rector, and is currently the vice president for external affairs. He has been a member of the Archaeological Council of Israel since 1997. He was on the managing committee of the Israel Science Foundation Bikura Fund. He served on the Committee on the State of Archaeology in Israel for the Israel Academy of Sciences, chairing the subcommittee on archaeological research. He was co-editor of the Journal of the Israel Prehistoric Society (מתקופת האבן) from 1985-1990, and editor from 2005-2012. He is currently on the scientific board of Paléorient.
He has directed field projects in the Negev and in Turkey (as a subproject of the Titris Hoyuk excavations run by G. Algaze and T. Matney), and the excavations have included sites from the Middle Paleolithic, Upper Paleolithic, Epipaleolithic, Chalcolithic, Early Bronze Age, Late Bronze and Iron Ages, Nabatean, Byzantine, Early Islamic and recent periods. Research has focused on two long term projects, chipped stone tools in the proto-historic periods and their ultimate eclipse by metallurgy and other technologies, and the archaeology of desert pastoralism, using the Negev as exemplar. He has published 5 books and edited a sixth. The current volume his second Archaeological Survey of Israel monograph. His book Lithics after the Stone Age won the 1997 G.E. Wright Publication award of the American Schools of Oriental Research. He has published over 150 research papers in journals and collected volumes. Current research includes the analysis of Negev rock shelters used for herd stabling, the analysis and write-up of excavations at Qubur el Walaydeh (with Gunnar Lehmann), an Iron Age site in the Western Negev, and the final write-up of the excavations at Nahal Tsafit, a Middle Timnian (Chalcolithic) site in the northeastern Negev.
He has supervised more than 25 research students at the MA and doctoral levels, including international students from the United Kingdom, the United States, France, and Holland.

Beyond my professional interests, I like literature in general, and Los Angeles detective novels in particular (Chandler, Macdonald, Connelly, Crais); Dylan (he deserved the Nobel, but so does Philip Roth); science and its history; small music clubs (e.g., the Saxon Pub, in Austin, TX), dinosaurs (memories from childhood of the American Museum of Natural History)