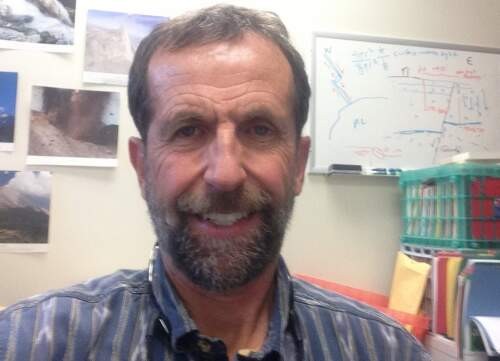 Dr. Dave Boden is currently professor of geoscience and has been teaching courses in physical geology, earth hazards, and geological field methods at Truckee Meadows Community College (TMCC) since 2004. His book on the Geologic Fundamentals of Geothermal Energy is an outgrowth of a course on the geology of geothermal energy he has taught since 2007. For almost 20 years prior to coming to TMCC, Dr. Boden explored for base and precious metal deposits (the fossil analogs of geothermal systems).

For nearly 20 years prior to coming to Truckee Meadows Community College (TMCC), the author worked as a minerals exploration geologist.  This career evolved from exploring for base metal mineralization associated with volcanogenic massive sulfides and porphyry systems to epithermal, mainly volcanic-hosted, precious metal deposits. In that role, Dr. Boden worked for many companies (most of which no longer exist) including Anaconda, Phelps Dodge, Echo Bay Exploration, Corona Gold, Lac Minerals, Homestake, and Andean Silver Corporation.  He has also worked for the Nevada Bureau of Mines and Geology and in association with Dr. Chris Henry and Dr. Steve Castor helped mapped the geology and mineralization of the Tuscarora mining district in northeast Nevada.  He and Dr. Henry also mapped the geology of the Talapoosa mining district in west-central Nevada.  As a result of his work in minerals exploration and geologic mapping, Dr. Boden has authored and coauthored several published scientific articles and geologic maps, including the volcanic geology of the giant Round Mountain gold deposit and vicinity, the Bullfrog gold deposit in southern Nevada, and volcanic geology and mineralization of the Tuscarora region.  Dr. Boden's interest in geothermal energy began initially while working at Round Mountain, where geothermal fluids are used in the heap leaching of ore to inhibit freezing of percolating solutions during winter and thereby enhance gold recovery year round.
At TMCC, Dr. Boden helped establish the Geothermal Plant Operators certificate program and Applied Associate of Science degree in Energy Technologies with a Geothermal Emphasis.  This program placed many graduates into operating geothermal power facilities in Nevada and California.  The program is currently undergoing retooling to develop an online option to achieve a wider audience, both nationally and internationally.
Finally, the author was recently elected to the Board of Directors of the Geothermal Resources Council, where he would like to further promote education and awareness of geothermal energy to children in schools and to the general public. There he has the privilege to work with talented, like-minded people who recognize the unique value of geothermal energy and work diligently to make those virtues better known.

Since becoming a community college instructor, Dr. Boden' area of research has shifted in large measure from applied geologic research, such as geologic mapping of hydrothermal systems, toward figuring out how students learn best.  After about 10 years of making students yawn during lecture, Dr. Boden has come to realize that students learn best by doing.  Lecture during class is now typically minimized and collaborative activities are maximized that allow students to discover and apply concepts.  For example, the concepts of porosity and permeability, key attributes governing the flow characteristics of geothermal fluids, are explored while students measure the porosity and permeability of pumice and reticulite (a frothy form of basaltic glass).  Much of Dr. Boden's time in teaching is now spent developing investigative activities instead of preparing soporific lectures.  Nonetheless, when the opportunity presents itself, Dr. Boden still very much enjoys getting in the field and mapping altered and unaltered rocks in and around hydrothermal systems.

In his spare time, the author enjoys hiking and skiing in the backcountry, including to remote hot springs, with family and friends,  He is also known to keep decent rhythm on his drum with accompanying guitar and singing around a campfire.