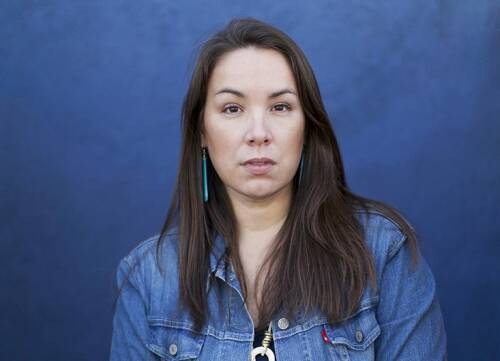 Eve Tuck's research is on urban education and Indigenous studies. As a whole, her work focuses on how Indigenous social thought can be engaged to create more fair and just social policy, more meaningful social movements, and when that doesn't work, robust approaches to decolonization. She is the co-creator of the Citation Practices Challenge, an effort to be more intentional about citation. Tuck is Unangax and is an enrolled member of the Aleut Community of St. Paul Island, Alaska.

Eve Tuck is an award-winning Indigenous (Unangax) scholar who is internationally regarded for her contributions to educational research and Indigenous studies. She has worked closely with diverse urban and rural communities to conduct research that improves education and social policy, particularly for disadvantaged and marginalized youth. Tuck held a prestigious Ford Foundation Postdoctoral Fellowship (2011-2012) to conduct research on Indigenous research ethics. She was recently named a William T. Grant Foundation Scholar (2015-2020), a highly competitive career development award.

Tuck has published her research in a range of formats, including notable refereed journals, open-access refereed journals, and books. She has published 20 peer-reviewed articles in journals such as the prestigious Harvard Education Review, American Quarterly, Educational Policy, Qualitative Inquiry, and International Journal of Qualitative Studies in Education. Her co-authored article, “Decolonization is Not a Metaphor” (2012), was the lead article in the founding issue of the open-access refereed journal Decolonization: Indigeneity, Education & Society, and has been downloaded over 80,000 times and cited over 300 times.

Tuck founded a groundbreaking book series with Routledge on Indigenous and Decolonizing Studies in Education, which she co-edits with K. Wayne Yang. Tuck and Yang are also co-editors-in-chief of the innovative new journal, Critical Ethnic Studies, published twice a year by University of Minnesota Press. Over the past five years, Tuck has co-edited five special issues of leading academic journals in education and qualitative research including International Journal of Qualitative Studies in Education, Environmental Education Research, English Journal, Cultural Studies—Critical Methodologies, and Educational Studies.

In addition to scholarly impact, Tuck’s work exemplifies socially engaged research that is conducted with and for the benefit of working class, racialized, and Indigenous communities. Her William T. Grant Foundation project, Migrant Youth, Deferred Action and Postsecondary Outcomes ($350,000 USD), is a 5-year study examining educational outcomes of school-aged children whose families migrate to the US for seasonal agricultural labor. In New York City, she worked with youth co-researchers to examine the promises and pitfalls of the GED for young people who are pushed out of high schools. Because of the social impact of her work as well as her respectful engagement with communities, Tuck is a sought-after collaborator by NGOs, governments, and community-based organizations.

In 2014, Tuck was recognized with an Early Career Award by the Committee on Scholars of Color in Education of the American Educational Research Association (AERA).  Tuck has won two book awards from AERA, including Outstanding Edited Volume from Division B: Curriculum Studies (2015) and Outstanding Book Award from the Qualitative Research Special Interest Group (2013). She has held prominent leadership roles in the association, including an appointed role as Program Co-Chair of Curriculum Studies from 2015-2017, and elected positions on the Special Interest Group (SIG) Executive Committee and the Indigenous Peoples of the Americas SIG. Tuck also won a Critics Choice Book Award from the American Educational Studies Association in 2013.

Respect and Risk: Chasing the benefit of research in Indigenous communities

Biting the University that Feeds Youth