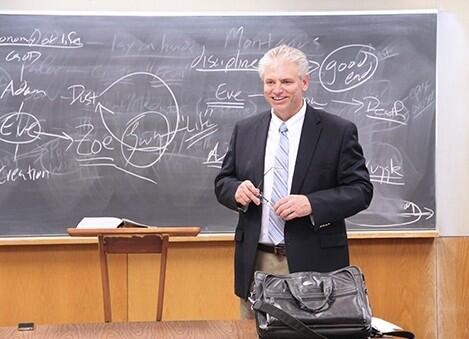 Dr. James Bushur has been immersed in patristic theology for over two decades. He currently serves on the theological faculty of Concordia Theological Seminary, Fort Wayne, IN. In the classroom, Dr. Bushur demonstrates his love for patristic texts and his desire to ground Christian identity in the genealogical roots of the Nicene Creed.. A lifelong Hoosier, Dr. Bushur resides in Fort Wayne, IN, with his wife and three children.

Immersed in patristic theology for more than two decades, the Rev. Dr. James G. Bushur, has studied and contemplated early Christian texts since the outset of his career. James Bushur, Ph.D., S.T.M., M.Div., B.A., began his theological career at
Concordia Theological Seminary, Fort Wayne, Indiana.  Ordained as a pastor in the Lutheran Church—Missouri Synod in 1992, Dr. Bushur soon recognized the need to root the Christian identity of those he served in something deeper than denominational loyalty.  This led him to a deeper study of patristic theology in order to make the genealogical roots of Christianity more accessible to contemporary congregations.  Under the supervision of Dr. William C. Weinrich, Dr. Bushur began work on an S.T.M. degree in 1993.  He focused on the era of martyrdom and the theological conflicts that surrounded certain “Gnostic” spiritualites.  He completed the S.T.M. degree in 1998 with the thesis, The Flesh of Christ and the Economy of Salvation in the Teaching of St. Irenaeus, Bishop of Lyons.

As a parish pastor, Dr. Bushur has served two LCMS congregations--Trinity Lutheran Church in Goodland, Indiana (1994-1999) and Immanuel Lutheran Church in Decatur, Indiana (1999-2006). While serving at Immanuel, he began work on a PhD in Patristic Theology at the University of Durham, UK.  Under the guidance of his advisor, Dr. Carol Harrison, this doctoral work expanded his study of St. Irenaeus, especially as it related to the fertile ground of patristic exegesis.  In 2010, Dr. Bushur completed his PhD at the University of Durham culminating in his thesis, “Joining the End to the Beginning”: Divine Providence and the Interpretation of Scripture in the Teaching of Irenaeus, Bishop of Lyons.

In 2006, Dr. Bushur was called to Concordia Theological Seminary, Fort Wayne, Indiana, as Assistant Professor of Historical Theology. Dr. Bushur’s classes invite students into the contemplation of early Christian texts.  His History 1 class introduces first year students to the Nicene Creed and the first four ecumenical councils.  He also teaches Theology of the Greek Fathers and Theology of the Latin Fathers designed to introduce students to foundational texts from both the Western and Eastern traditions. Some of Dr. Bushur’s more advanced seminar courses include: Irenaeus of Lyons, Reading Scripture with the Fathers, Cappadocian Fathers, and Post-Chalcedonian Christology.  All of these classes demonstrate Dr. Bushur’s love for patristic theology and his desire to ground pastors in the genealogical roots of the Nicene Creed and its theology.

In 2011, Dr. Bushur was chosen to serve as the Director of Deaconess Formation at CTSFW.  Dr. Bushur serves both as the theological supervisor of the program and teaches several courses including: History of the office of Deaconess and Theology of Mercy.  Due to his faithful service, Dr. Bushur received tenure in 2015 and was advanced in rank to Associate Professor of Historical Theology in 2016.