Professor K.T. Chau is the Chair Professor of Geotechnical Engineering of the Department of Civil and Environmental Engineering at the Hong Kong Polytechnic University. He obtained his honors diploma with distinction from Hong Kong Baptist College; his master’s of engineering from the Asian Institute of Technology; his Ph.D. in Theoretical and Applied Mechanics from Northwestern University; and an Executive Certificate from the Graduate School of Business of Stanford University.


Professor K.T. Chau, Ph.D., is the Chair Professor of Geotechnical Engineering of the Department of Civil and Environmental Engineering at the Hong Kong Polytechnic University. He obtained his honors diploma with distinction from Hong Kong Baptist College (Hong Kong); his master’s of engineering in structural engineering from the Asian Institute of Technology (Thailand), where he was also awarded the Tim Kendall Memorial Prize (an academic prize for the best graduating student); his Ph.D. in Theoretical and Applied Mechanics from Northwestern University (USA); and an Executive Certificate from the Graduate School of Business of Stanford University.
Dr. Chau worked as a full-time tutor/demonstrator/technician at Hong Kong Baptist College (19841985), as a research associate at the Asian Institute of Technology (summer of 1987), a research assistant at Northwestern University (19871991), and as a post-doctoral fellow at Northwestern University (19911992). At Hong Kong Polytechnic University (PolyU), he has served as a lecturer, an assistant professor, an associate professor, a full professor, and a chair professor since 1992. At PolyU, he was the Associate Dean (Research and Development) of the Faculty of Construction and Environment, the Associated Head of the Department of Civil and Structural Engineering, the Chairman of the Appeals and Grievance Committee, the Alternate Chairman of the Academic Appeals Committee, and the Alternate Chairman of the University Staffing Committee.
Dr. Chau is a fellow of the Hong Kong Institution of Engineers (HKIE), the past Chairman of the Geomechanics Committee (20052010) of the Applied Mechanics Division (AMD) of ASME, and the past Chairman of the Elasticity Committee (20102013) of the Engineering Mechanics Institute (EMI) of ASCE. He is a recipient of the Distinguished Young Scholar Award of the National Natural Science Foundation, China (2003); the France-Hong Kong Joint Research Scheme (20032004) of RGC of Hong Kong; and the Young Professor Overseas Placement Scheme of PolyU. He was a recipient of the Excellent Teaching Award of the Department of Civil and Environmental Engineering (2014). He is a past President of the Hong Kong Society of Theoretical and Applied Mechanics (20042006) after serving as member-at-large and Vice President. He also served as a Scientific Advisor of the Hong Kong Observatory of HKSAR Government, an RGC Engineering Panel member of the HKSAR Government for 7 consecutive years, and served as the Vice President of the Hong Kong Institute of Science. He held visiting positions at Harvard University (USA), Kyoto University (Japan), Polytech-Lille (France), Shandong University (China), Taiyuan University of Technology (China), the Rock Mechanics Research Center of CSIRO (Australia), and the University of Calgary (Canada).

Dr. Chau’s research interests have included geomechanics and geohazards, including bifurcation and stability theories in geomaterials, rock mechanics, fracture and damage mechanics in brittle rocks, three-dimensional elasticity, earthquake engineering and mechanics, landslides and debris flows, tsunami and storm surges, and rockfalls and dynamic impacts, seismic pounding, vulnerability of tall buildings with transfer systems, and shaking table tests. He is the author of more than 100 journal papers and 200 conference publications. His first book entitled Analytic Methods in Geomechanics was published by CRC Press in 2013. 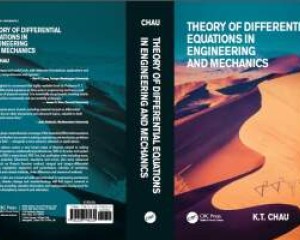 Comments by James R. Rice on book “Theory of Differential Equations in Engineering and Mechanics” by Professor K. T. Chau.

I am delighted to recommend this highly readable book by K. T. Chau on differential equations as they arise in engineering mechanics and allied areas of physical science. It is essentially encyclopedic (running nearly 1000 pages) but consistently and successfully pedagogic.

Professor Chau’s book is in no sense a simple litany of recipes for how to solve this or that class of problems.  Rather, the logic of the approach is carefully outlined in each case, starting at a simple intuitive level that beginning students, with no background beyond basic calculus, will surely find accessible.

Chau first builds on that background with a comprehensive Chapter 1 on “Mathematical Preliminaries”, introducing such as series expansions, complex function concepts including, e.g., the Cauchy Integral Formula and residue theorem, vector calculus (div, grad, curl), the divergence and circulation integral theorems, Taylor and Laurent series expansions, and even tensor concepts, illustrated in Cartesian, cylindrical and spherical coordinates.  And all that, like the following chapters, is interlaced with interesting historical tidbits and anecdotes, keeping the readers interest while attaining a remarkable level of presentation.  He is very successful, through a thoughtful presentation, well calibrated to beginners, in making all of that accessible and engaging. There are also lots of example problems, often with thoughtful informative comments, at the Chapter end.

The focus then turns to solution methods for partial differential equations, beginning with first order in Chp. 6 and higher order subsequently in Chp. 7, with special reference to the classical elliptic, hyperbolic and parabolic pde’s arising in such as fluid dynamics, thermal science, elasticity and structural mechanics.  Next comes a Chp. 8 on Green’s functions for linear pde’s and the reformulation of pde problems as integral equation problems.

There follows a Chp. 9 on the classical Wave, Diffusion and Potential pde’s, including their applications in mechanics, thermal science and electro-magnetism, and then a Chp. 10 on Eigenfunction expansions and their applications to solving pde’s.  Next comes a Chp. 11 on integral and integro-differential equations, including the classical integral transforms (Laplace, Fourier, Hankel, Mellin, Hilbert and another 10 or so lesser known transforms), and examples of solved classes of integral equations.  As is characteristic of  Professor Chau’s presentation, there are lots of solved examples, and procedures are nicely illustrated with effective graphics.

There are hordes of useful Appendices, mostly on mathematical details, but also one including capsule biographies of roughly 75 major figures, running alphabetically from Abel to Wronski.

Again, the presentation is distinguished for its accessibility and carefully thought-through graphics -- Professor Chau clearly understands how to write appropriately with a student in mind (and in a manner much appreciated by this reviewer).