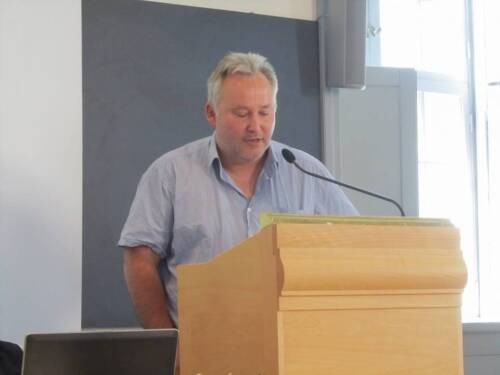 Dr Simons is based at the Institute for Russian and Eurasian Studies at Uppsala University, teaches at the Department of Peace and Conflict Research, namely the course on Mass Media and Contemporary Armed Conflict. He is also a lecturer at the Department of Communication Sciences at Turiba University in Riga, Latvia. Many of his publications can be found at https://uppsala.academia.edu/GregSimons.

Born in Christchurch, New Zealand and graduating with a PhD from the University of Canterbury in 2004, Associate Professor Greg Simons is currently a researcher at the Institute for Russian and Eurasian Studies (IRES) at Uppsala University and a lecturer at the Department of Communication Science at Turiba University in Riga, Latvia. He is on the Senior Editorial Board of the Journal for Political Marketing. Dr Simons teaches a course on Mass Media and Contemporary Armed Conflict. His research interests include: changing political dynamics and relationships, mass media, public diplomacy, political marketing, crisis management communications, media and armed conflict, and the Russian Orthodox Church. He also researches the relationships and connections between information, politics and armed conflict more broadly, such as the GWOT and Arab Spring. Simons is the author/editor of numerous refereed articles, chapters and books: Gregory Simons, Mykola Kapitonenko, Viktor Lavrenyuk, Erik Vlaeminck, The Politics and Complexities of Crisis Management in Ukraine: A Historical Perspective, London: Routledge, 2017; Simons, G. & Chifu, I., The Changing Face of Warfare in the 21st Century, London: Routledge, 2017; Simons, G. & Westerlund, D. (eds), Religion, Politics and Nation-Building in Post-Communist Countries, Farnham, Ashgate, 2015; Krasnov, E., Karpenko, A. & Simons, G. (eds), Crisis Management Challenges in Kaliningrad, Farnham, Ashgate, 2014; Porfiriev, B. & Simons, G. (eds) Crises in Russia: Contemporary Management Policy and Practice from a Historical Perspective, Farnham, Ashgate, 2012; Ekengren, M. & Simons, G. The Politics of Security Sector Reform: Challenges and Opportunities for the European Union’s Global Role, Farnham, Ashgate, 2011; Mass Media and Modern Warfare: Reporting on the Russian War on Terrorism, Farnham, Ashgate, 2010. He has also been engaged in two assignments for the Council of Europe as a; General Rapporteur for Council of Europe Conference in Strasbourg on Safeguarding free speech and the right to information: media in times of crisis in October 2005; and as a keynote speaker at the Joint Seminar of the Baku and Yerevan Schools of Political Studies (organised by Council of Europe and Folke Bernadotte Academy), Mass Media as a Tool for Creation of Bridge of Mutual Trust in December 2007. The OSCE appointed him as a consultant to examine the current state of public communications during crises by the Kyrgyz government and authorities, and to make recommendations on its improvement over November and December 2013.

History in general; other cultures and ways of thinking; travelling to new places; hunting, fishing and berry picking; nature