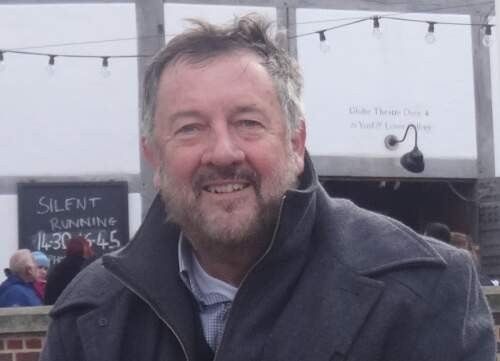 After obtaining a BA and an MA in Classics (with special interest in Greek Philosophy), I taught English for over thirty years both in the UK and abroad. In teaching Shakespeare, students usually grappled with the text, but one group who were studying Henry V showed interest in the author and his apparent royalist and aristocratic affiliations. Thus I was led to a study of the life of Shakespeare and found much speculation but little concern for contemporary documents.

My interest in Shakespeare was awakened early in my education when I directed a small group in the sleep-walking scene from the Scottish play, myself playing Lady Macbeth. I studied Classics at university with a special interest in Athenian drama, where appreciation of a play was highly informed by the date and significance of its performance.
Becoming an English teacher, working both in the UK and abroad, I taught a range of the works by the Bard. When confronted by a class who wished to know more about the author of Henry V, I found myself perplexed by the range and variety of biographical claims about Shakespeare.
Thus I began to sift the frequently cited myths about Shakespeare from the small number of contemporary documents which cite his name. Such a void might dismay a historian, but is a biographer's delight: almost any claim about the Bard can be advanced without any evidence to the contrary.
There are many anecdotes about Shakespeare and the village of Titchfield, which was the seat of the earls of Southampton. Perhaps Shakespeare spent time there whilst enjoying the patronage of the third earl. Possibly. But like so many other claims, it is unverifiable from contemporary evidence.
I travel extensively and like to see how other cultures respond to Shakespeare. It is astonishing how highly he is revered by other people, often more as a political playwright than as a personal poet. Plays such as Richard II and King John frequently resonate with people who live under an inefficient regime.

The dates and chronology of the plays.
The biographical traditions about Shakespeare.

Shakespeare in performance, especially at the RSC in Stratford and at the Globe in London.
Travel in Britain, especially with a literary emphasis.
World Travel. I lived in Canada for a year and in South America for five years. Current plans include trips to Ethiopia, Bulgaria and Spitzbergen.