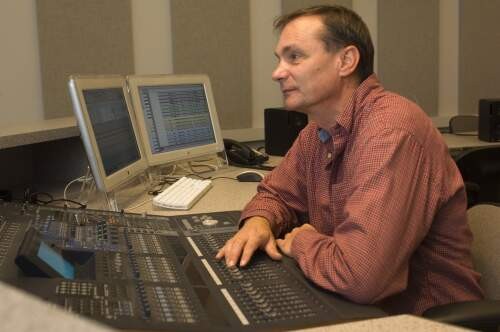 Richard K Thomas is a professor of Visual and Performing Arts at Purdue University with over one hundred credits as a composer, sound designer, author, playmaker, and educator. He is a Fellow of USITT, and winner of the 2018 Distinguished Achievement Award in Sound Design and Technology.


Rick Thomas is a full professor of Visual and Performing Arts at Purdue University. He has had a long, successful career as a composer, sound designer, author, playmaker, and educator. As a certified sound designer in United Scenic Artists Local 829, Rick has composed scores and designed sound for over 100 productions including the Hong Kong Repertory Theatre, Dublin Theatre Festival, Colorado Shakespeare Festival, and ESPN television among many others. His work has been exhibited in the Czech Republic, Israel, Cuba, Korea, the Philippines, Finland, Poland and across the US and Canada. Rick has written about the art and practice of theatre sound extensively for the Theatre Design and Technology Journal (winning the 2002 Herbert Greggs Award for Outstanding Journal Article), has published the first monograph on sound design, The Designs of Abe Jacob, and contributed to Ross Brown’s book, Sound: A Reader in Theatre Practice.
Rick has lectured extensively, including the Broadway Sound Master Classes, the film institute at Babelsburg, Germany, the Bregenzer Festspiele in Austria, the Prague Quadrennial, World Stage Design in Korea, Synergetic Audio Concepts, the Audio Engineering Society (AES), the Acoustical Society of America (ASA), American Theatre in Higher Education (ATHE), and many universities in the United States and abroad. He has been especially active in presenting workshops, lectures and panel discussions at The United States Institute for Theatre Technology (USITT) for close to forty years, starting with a panel presentation with the legendary Harold Burris-Meyer, “What Is Sound Design,” in 1978. Along the way, he introduced an extraordinary number of new concepts to theatre starting with demonstrations at the 1980 USITT National Conference in Kansas of the use of electronic sound effects in the theatre, continuing in 1981 with a demonstration of synthesizer usage, and in 1987 with a demonstration of the practical use of digital samplers. In 1990, he demonstrated many new digital technologies working together in Bloodbath of the Living Dead in 3D, which he and a group of Purdue students premiered at the USITT National Conference in Milwaukee. He created the first known public exhibition of a theatre sound score for the 1984 USITT National Conference in Orlando. In 1987, he worked with the Jeff Awards Committee in Chicago to establish one of the first awards for sound designers in theatre. He was first to publish articles in 1987 and 1988 drawing attention to the need for copyright clearance and sound designer unions in theatre. He co-created the first Scenofest at the 2003 Prague Quadrennial, introducing sound to the legendary exhibition, and went on to co-create the inaugural World Stage Design in Toronto in 2005, in which he also curated the inaugural sound exhibition.
As a playmaker, Rick has also sought to push the boundaries of theatre both technically and aesthetically with original works including his punk rock musical Awakening (1993), The Creature, excerpts of which were performed in Santiago Cuba, Finland and Poland (1999-2000), a motion-capture dance exploration generating real-time visual music, The Life of Umbrellas (2004), a collaboration with the New Century Saxophone Quartet, The Art of the Fugue, that premiered at Purdue and subsequently performed in St. Louis and New York City (2004-2005), and the experimental media piece Labcoats on Clouds (2007), that premiered at the 2007 Prague Quadrennial. For over twenty years, then, Rick has explored the main thesis of this book in production, namely the roots of theatre in music. He especially enjoys setting his work in the “grey area between music and theatre, plays and concerts,” emphasizing story telling through music and mimesis first, and only subsequently expanding the journey through language when appropriate. His most recent original creations have especially focused on this approach. Ad Infinitum³, which premiered at the 2011 Prague Quadrennial, featured an immersive dub-step styled theatre game that utilized unique smartphone technology that allowed audience members to become characters in the performance using their smartphones as controllers. It was subsequently performed at the QualComm Institute in San Diego CA in 2014. In 2014, Rick premiered Choices, at Purdue University, a meshing of Electronic Dance Music (EDM) and theatre, which Rick affectionately calls “thEDMatre.” The production was one of twenty US theatre productions of the last four years featured in the US National Exhibition at the 2015 Prague Quadrennial, and performed at the 2017 World Stage Design Festival in Taipei. He collaborated with Grammy Award winning singer-songwriter Carrie Newcomer, in creating the new musical Betty’s Diner, which premiered at Purdue University in 2015.
As an educator at Purdue University, Rick was the first graduate of a Master of Fine Arts (MFA) program in sound in 1980, and went on to develop the MFA program to include separate tracks in Sound Design, Audio Technology and Audio Engineering. He has worked extensively with the colleges of Engineering and Technology to develop audio related curricula within those programs. Within the College of Liberal Arts at Purdue he has developed educational sound programs and classes related to radio and television broadcasting, film and video studies, music and dance. In 2012, he established an undergraduate major in Sound for the Performing Arts. He has developed a wide array of courses in audio engineering, audio production and the art and aesthetics of sound design, and developed a close working relationship with the audio industry to bring exceptional guest lecturers, workshops and seminars to Purdue. His efforts to facilitate learning in theatre sound have been recognized with the Purdue University Outstanding Undergraduate Teaching Award in Memory of Charles B. Murphy in 2007 and inclusion in the Book of Great Teachers at Purdue University in 2008.
Rick is a 2017 recipient of the USITT Distinguished Achievement in Sound Design and Technology Award, and a Fellow of the Institute, where he has also been awarded the Joel E. Rubin Founder’s Award. He is an elected member of the National Theatre Conference. He is the founder of the International Association of Theatre Architects and Technicians (OISTAT) Sound Design Group (formerly the OISTAT Sound Working Group). He is the former USITT Sound Commissioner, associate editor for sound for the Theatre Design and Technology Journal, and member of USITT’s Board of Directors.