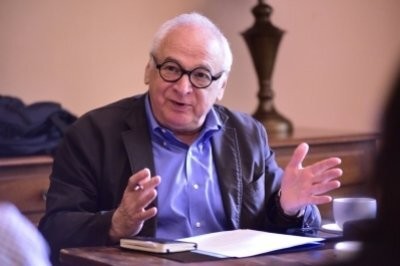 Since 2010, Jeffrey Dvorkin is a lecturer and director of the journalism program at UTSC and a senior fellow at Massey College. Prior to teaching, he was in charge of two international news organizations, CBC Radio in Toronto and NPR News in Washington, DC. From 2000-2006 he was NPR’s first independent news ombudsman. Dvorkin has lectured and taught journalism abroad as well, in Turkey, West Africa, Chile, Portugal, Germany, Poland and the UK, to name a few. He is a frequent media commentator

Dvorkin’s journalistic career began in Montreal with the Canadian public broadcaster, CBC TV News where he was a reporter and producer. He was a Parliamentary news producer for the CBC in Ottawa, and an editor and producer for CBC TV’s The National in Toronto. In 1984, Dvorkin moved from CBC television to join the CBC’s National Radio news service where in 1991, he became Managing Editor and Chief Journalist for CBC Radio.

In 1997, Dvorkin left Canada to run NPR News in Washington, DC as Vice President of News and Information. In 2000, Dvorkin became NPR’s first news Ombudsman – a position he held until 2006. As Ombudsman, Dvorkin visited more than 280 public radio stations around the US and received emails from thousands of listeners who were curious (and occasionally quite annoyed) about NPR’s coverage on the main issues in the news.

He addressed many of these issues on the air and in an online column about questions raised by the listeners about journalistic process, integrity, bias and language.

While NPR’s Ombudsman, he was elected as president of the Organization of News Ombudsmen (ONO) – a 30-year old international grouping of independent news ombudsmen and public editors in more than 25 countries.

In 2006, Dvorkin left NPR to resume teaching, journalism training and writing his blog www.nowthedetails.blogspot.com. In 2008, he returned to Canada and fulltime teaching.

In 2008, Dvorkin was named ONO’s first executive director  which he held until 2010.

In addition to teaching, he is a Senior Fellow at Massey College and holds an appointment to the Institute of Medical Science at the University of Toronto, advising on ethical issues.

In 2018, Dvorkin wrote “Critical News Literacy and is published by Routledge.

He is married to Elizabeth Barrett, a practising psychotherapist. They have a son Eli, who lives in Queens, NY and is married to Hillary Reeves. Eli is the managing editor for the Center for an Urban Future, a think tank about the issues facing New York City.