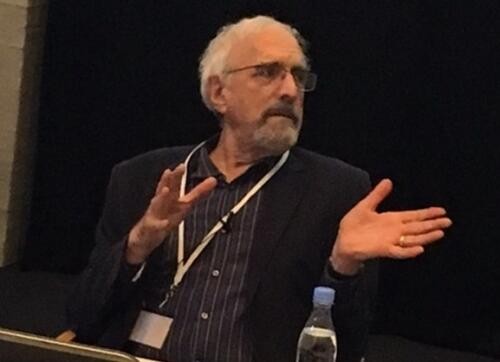 Attorney South Africa (1962) and English solicitor (1975). In 1985 I trained as a mediator in the US and co-founded the UK's Family Mediators Association and was the first Director of Mediation of the family lawyers' association Resolution. I mediated in family and commercial fields, with an increasing interest in psychology and high conflict personalities, on which I have co-written and co-trained. Now retired, I have focused on how professionals can integrate "head, heart & gut" into practice.

Henry, South African attorney (1962), originally practised in Cape Town and acted for many Robben Island prisoners including Nelson Mandela, emigrated to the UK in 1971 and re-qualified as an English solicitor (1975) and practised in London, latterly as a partner in a City firm. He trained as a mediator in New York in 1985 and co-founded the UK’s Family Mediators Association in 1988 and is a founding Vice-President. He set up the mediation programme for the lawyers' organisation Resolution and was its first Director of Mediation. He was on the initial training faculty of the commercial mediation organisation, CEDR – the Centre for Effective Dispute Resolution.

He mediated for some 30 years across a range of family, commercial and civil matters and ran mediation training in the UK, Hong Kong, Denmark, Iceland and South Africa. He was co-author with Arthur Marriott QC of "ADR Principles and Practice" (1993; 4th ed. 2018), which has sold in over 60 countries. He received the Civil Mediation Council’s 2013 Lord Slynn Prize for developing mediation in the UK and the International Academy of Mediators’ 2013 Lifetime Achievement Award.

Henry’s interest in psychology spans over four decades, having touched on it in his BA degree and in a certificate course at Regent’s College London. It was highly relevant to his legal and mediation practices. Conscious of the links between highly conflicted and entrenched couples and attachment issues, he and psychotherapists Neil Dawson and Brenda McHugh ran training courses on this subject, in 2006 publishing a lawyers’ training guide "Managing Difficult Divorce Relationships".

This developed into a realisation that people in all working relationships could benefit from an accessible and authoritative introduction to working with “head, heart and gut”: understanding the basics of relevant psychology and neuroscience, the role of emotions and the power and limitations of intuition – in the context of working with “boundaried empathy”, humanity, understanding and self-awareness, and covering practical aspects such as communication, negotiation and conflict resolution skills. This led to Henry, Neil and Brenda writing "Psychology, Emotion and Intuition in Work Relationships: The Head, Heart & Gut Professional" published by Routledge in 2018.