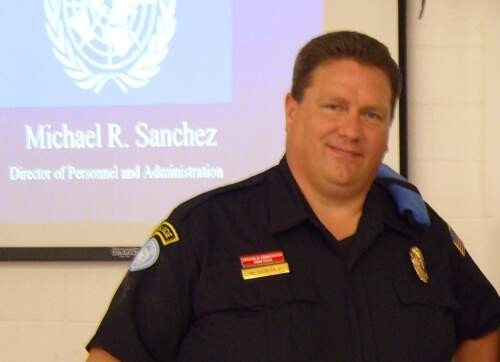 Dr. Michael R. Sanchez is an experienced criminal justice with 20+ years of hands on experience in the criminal justice system, including 4 years as an International Police Officer for the United Nations. He served three years in Kosovo, ultimately as Director of Personnel and Administration for the UN Police in Kosovo; and one year with the UN Police in Haiti, ultimately as a Regional Commander. Dr. Sanchez currently teaches Criminal Justice at the University of Texas Rio Grande Valley.

I am a native of East Hampton, New York; however, I have been living in Texas since 1997.  I have over 22 years of experience in all aspects of criminal justice; including policing, jail and detention, training, firearms, investigations, and police administration.  I have a Master Peace Officer license in the State of Texas and have served in the following areas: Detention and Jailor, Patrol, Investigations, Training Coordination, Firearms Instructions, Administration, Operations, Personnel and Hiring, Logistics and Purchasing, First Line Supervision, Lieutenant of Investigations, Deputy Chief of Police, Interim Chief of Police, Director of Personnel and Administration, Regional Commander, and Acting Deputy Commissioner.

I then received a huge promotion to Director of Personnel and Administration for the UNMIK Police.  The UNMIK Police was comprised of 2,190 International Police Officers from 47 different countries.  This position placed me as #10 on the UNMIK Police Chain of Command.  I supervised 790 International Police Officers and Local Staff and was a member of the UNMIK Police Commissioner’s Senior Staff.  I stayed in this position until the United Nations handed the policing mission in Kosovo over to the European Union in 2008; in fact, I was responsible for planning the administrative and logistical handover of the mission, which was the largest single project I ever managed.

On a personal note, I married the most wonderful woman while in Kosovo.  She is a rare Kosovo Albanian Catholic (95% of Albanians in Kosovo are secular Muslims).  She has really brought me happiness and joy in my life that I never expected to find.

After the UNMIK Police mission was handed over to the European Union, I was deployed to Haiti with the UN Police there.  Instead of staying in Administration, I served in the Operations Pillar working in the field.  I was the Deputy Regional Commander of the Les Cayes (Sud) Region for the United Nations Police in Haiti when the 12 January 2010 earthquake hit Haiti.  Shortly after the earthquake, I was promoted to Regional Commander.  I commanded the Les Cayes Region throughout the normalization and recovery efforts.  The Les Cayes Region is 1,000 square miles with a population of 1 million; and is serviced by 23 police stations employing over 365 police officers.

I ended my mission with the United Nations in Haiti in May of 2010.  I was fairly well burned out (the UN Police work 10-12 hours per day 7 days per week, unless you are on vacation).  I needed a break and a normal life.  I accepted a job working for a company that manages Immigration Detention Centers for Immigration and Customs Enforcement (ICE) around the United States.  I started as the Training Manger for the El Centro, CA ICE Detention Center.  After 8 months, I was promoted to Assistant Project Manager and was transferred to the Port Isabel Detention Center in Texas.  For six years, I was second in command of the largest Immigration Detention Center in the United States.  I supervised a workforce of 569 detention officers, security officers, transportation officers, and food service employees on a $330M federal contract.

I am still active in law enforcement.  I am a Lieutenant with the Precinct 2 Constable’s Office in Brownsville.  I write policies, conduct firearms training, and conduct Internal Affairs Investigations.

I am currently a full time Lecturer for the Criminal Justice Department of the University of Texas Rio Grande Valley.  I have also taught online since 2012 for Utica College in their online Cyber-security Master's Degree program.