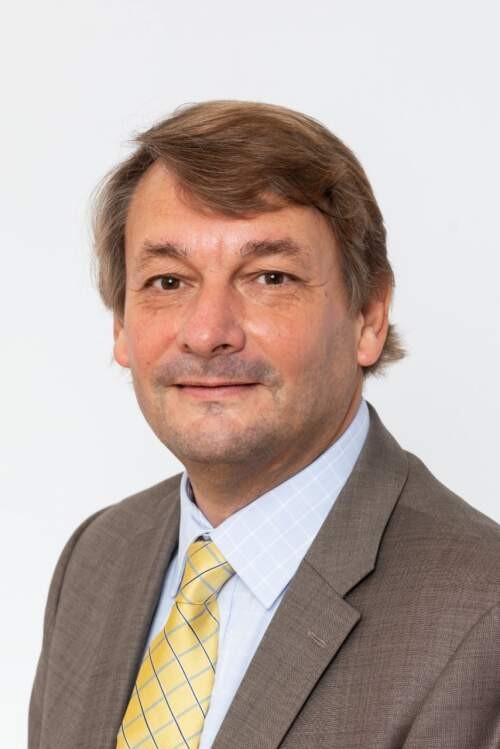 Hans-Martien ten Napel, Ph.D. is an Associate Professor of Constitutional Law at Leiden University in the Netherlands. Before his transfer to the law faculty, he taught at a Department of Political Science and was a Post-Doctoral Fellow at the Center for European Studies at Harvard University. In 2014 he was awarded a Research Fellowship in Legal Studies at the Center of Theological Inquiry in Princeton, NJ, which enabled him to be in full-time residence at CTI for the academic year 2014-2015.

Hans-Martien ten Napel, Ph.D., is an Associate Professor of Constitutional and Administrative Law at Leiden University in the Netherlands. He also co-coordinates the Network Faith in Democracy and is a member of the Steering Group of the Netherlands Law and Religion Scholars Network. Before his transfer to the law faculty, he taught at the Institute of Political Science of Leiden University’s Faculty of Social and Behavioural Sciences. He was a Post-Doctoral Fellow at the Minda de Gunzburg Center for European Studies at Harvard University (Cambridge, MA).

He initiated the popular Bachelor of Laws elective course on the Law of Democracy and a Master of Laws elective course on Comparative Constitutional Law. He served as a coach on the extracurricular Leiden Leadership Programme. In the summer of 2016, together with the vice-president of the Council of State, he taught the Honours Class ‘Constitutional Concepts and Practice’. Recently he developed the module ‘Politics and Law’ for the bachelor theology, track religion and society, at the Theological University Kampen (2021-2022). In addition, he is currently co-supervising three Ph.D. projects.

In 2014 he was awarded a Research Fellowship in Legal Studies at the Center of Theological Inquiry in Princeton, NJ, which enabled him to be in full-time residence at CTI for the academic year 2014-2015. In 2017 he received a ‘seed money grant for frontier research’ from the Leiden profile area Interaction Between Legal Systems.

Since 2015, he is a member of the editorial board of the Tijdschrift voor Religie, Recht en Beleid(Journal of Religion, Law, and Policy). In 2017, he published, as the fruit of his research fellowship, the monograph Constitutionalism, Democracy and Religious Freedom. To Be Fully Human (Routledge). 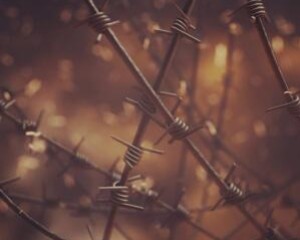 Attempts by the United States State Department’s Commission on Unalienable Rights to identify a subset of proper “unalienable rights” within the broader category of human rights are sometimes perceived as an almost reactionary effort. The adoption of a historical-philosophical perspective reveals that, on the contrary, even if applied within a natural law framework, natural rights are a fundamentally modern idea. 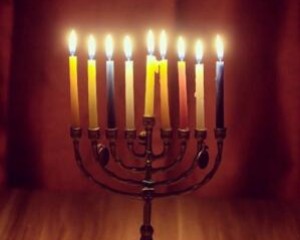 The Natural Law and Natural Rights Tradition: A Foundation for Religious Freedom

”To kick off our series on freedom of religion or belief, Hans-Martien ten Napel considers why the right to this freedom, a foundation stone of the liberal democratic order, is threatened. He describes how the notion of natural rights has been replaced by a proliferation of legalistic human rights. Seemingly a welcome development, this has unintentionally pushed the right to freedom of religion or belief to the margins.” 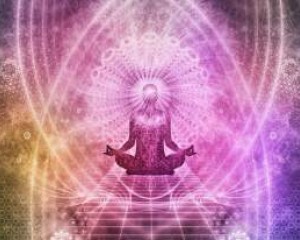 The Significance of Communal Religious Freedom for Liberal Democracy

The current article makes a case for the classical liberal position with respect to religious freedom. A liberal religious freedom conception forms the best guarantee that societal institutions will be able to fulfil their constitutional functions of a check on the government and as “seedbeds of virtue.” 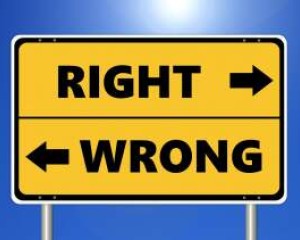 The opening paragraph of the essay reads as follows:

“What’s Wrong with Rights is a superb book. If there is one subject that lends itself to interdisciplinary research, it is that of human rights. To the extent that lawyers have ever been able to claim a monopoly, those days are now well behind us. In this book, Nigel Biggar makes a fundamental contribution from a theological point of view, which lawyers are well-advised to take to heart.”

The essay forms part of a series of posts on Biggar’s new book. Do make sure to check out the other contributions as well. 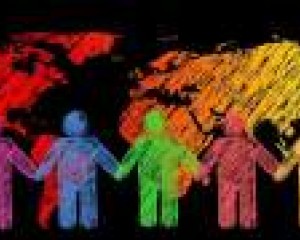 The title of Hans-Martien’s presentation was: “The European Courts and Religious Groups.” His paper consisted of three points. He started by saying something in general about the model of constitutional or fundamental rights as it has taken shape in practice in Europe in recent decades. This model provides a clear contrast to American thinking on constitutional rights. He demonstrated this through a book by the legal scholar Kai Möller, currently affiliated with the London School of Economics and Political Science.

He then turned to whether, and if so, to what extent, this model is also more specifically applicable to the topic of the panel, namely religious institutional autonomy. For this, he drew on the book by Joel Harrison of the University of Sydney Law School, published last year, titled Post-Liberal Religious Liberty.

Finally, he addressed a current court ruling, namely that of the Court of Justice of the European Union, on a ban on ritual slaughter. As he argued, this issue goes to the heart of the substantive religious institutional autonomy dimension. Simultaneously, the ruling illustrates the fragile balance that prevails in Europe regarding constitutional support for it. 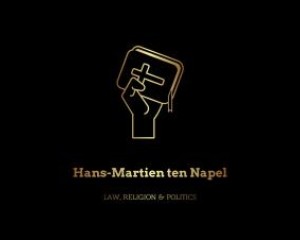 ‘An Encouraging Trend in Dutch Scholarship’

The latest issue of Ecclesiastical Law Journal contains a review of a recent book by my colleague Sophie van Bijsterveld, who is Professor of Religion, Law, and Society at Radboud University in Nijmegen.

Towards the end of the review, Dr. Patrick Nash (LLB, MSc, Ph.D., FHEA, BPTC) of the Woolf Institute, Cambridge, also refers to my recent book:

‘Van Bijsterveld’s book fits into an encouraging trend in Dutch scholarship – another good example of which is Hans-Martien ten Napel’s Constitutionalism, Democracy and Religious Freedom: to be fully human (2017) – which rejects the traditional state–individual binary of Church-state relations in favour of a richer, more holistic approach. Both van Bijsterveld and ten Napel rightly stress the systematic nature of constitutional democracy, whose health ultimately depends as much on civil society activity and positive social norms as on the protection of individual rights.’ 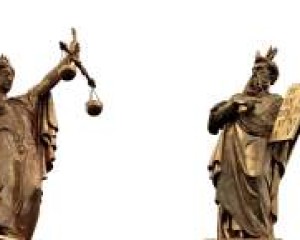 New review of book on Constitutionalism, Democracy and Religious Freedom. To Be Fully Human (2017) in Ecclesiastical Law

A new review of my book on Constitutionalism, Democracy and Religious Freedom. To Be Fully Human (2017) in the Ecclesiastical Law Journal:

‘This book is an enjoyably spry reflection on the pitfalls of aggressive secularism and the atomistic tendencies of modern liberal individualism. Ten Napel deploys comparative legal method, interdisciplinary scholarship and social pluralist thought from Burke to neo-Calvinism (pp 12–18) but does not try to reinvent the wheel; the book’s thesis and scope are refreshingly modest. (…)

Ten Napel makes several important contributions. He paints a compelling picture of the deleterious effects of the 1960s revolution on liberalism. Anyone concerned with the fact that “liberal” is fast becoming a term of abuse will find much to admire here. He does a very good job of collating international strands of pluralism and committing them to the defence of a strong civil society. For a fellow traveller more familiar with the Anglo-German school of pluralism (Gierke, Maitland and Figgis), the exotic sources on display are fascinating novelties. Napel’s gentle conservatism never strays into polemic and this makes his timely plea for a more historically literate, culturally grounded and community-oriented vision of religious liberty all the more potent.’ 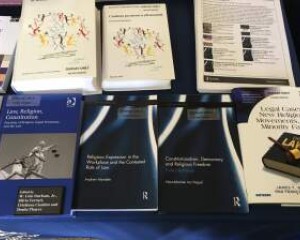 Reviews of 'Constitutionalism, Democracy and Religious Freedom. To Be Fully Human'

"Classical liberalism was supposed to resolve religious conflict within a society, principally by making religion a private matter and, in compensation, allowing religious communities, within limits, to conduct themselves as they saw fit. Today, the classical liberal model is undergoing a lot of stress, as people, particularly on the left, increasingly question what those limits should be. Hans-Martien ten Napel (Leiden University), one of the most interesting scholars in comparative law and religion today, has a new book, Constitutionalism, Democracy and Religious Freedom: To Be Fully Human (Routledge), that addresses these questions." - Mark Movsesian, Professor of Law and Director, Center for Law and Religion at St. John's University, Law and Religion Forum.

"Ten Napel's book is illuminating precisely because he begins by accepting the fact of deep differences of worldview, both in concepts and in practices, and by assuming as the default for public policy the accommodation of diversity, rather than a striving for uniformity. This means giving full value to non-religious, along with religious, reasons not to go along with the public consensus and generally accepted laws. Also, especially, fully to accept that civil society--nonprofits, houses of worship, companies--is a major component of our lives and not to be ignored in considering how to achieve a unity that respects diversity." Stanley Carlson-Thies, irfalliance.org/institutional-religious-freedom-in-review/.

"To sum up, the book Constitutionalism, Democracy and Religious Freedom: To Be Fully Human is a well-written text on such important issues for contemporary societies as freedom of religion or belief in its communal form, freedom of conscience, and civic activity. It attempts to show an integral approach to the human being. This integral approach should strive to create such an ethos in which a full development of the human being is possible. By a full development is meant such a condition in which this being can manifest his or her beliefs not only within the privacy of his or her home but also in public without any fear of oppression or discrimination. If citizens are forced to hide their religious views, they are doomed to be inauthentic selves, and will always feel a kind of schizophrenia." Prof. Jan Klos Hab. Ph.D., Journal of Markets and Morality.

"Liberalism's got problems. On this, most of us can agree. Hans-Martien ten Napel's newest book is no exception to that emerging consensus. Ten Napel's book is part of the zeitgeist of new sensational works on the crisis of liberalism, James K.A. Smith's Awaiting the King and Patrick Deneen's Why Liberalism Failed, which argue that we have hit 'peak liberalism.' Happily, ten Napel seems far less pessimistic, though. Rather, as Charles Taylor would describe his own work in A Secular Age, it is a kind of loyal opposition to constitutional liberalism: not a revolutionary attempt to dispose of it, but an effort to alert us to the resources inside liberalism's own often forgotten or marginalized canon, especially religious ones, that may enlarge its virtues and minimize its vices." Robert Joustra, Review of Faith & International Affairs. 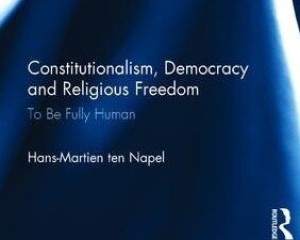 Wonderful news: the editorial board of Routledge have decided to publish my book ‘Constitutionalism, Democracy and Religious Freedom. To Be Fully Human’ (2017) in paperback. They anticipate publication in March 2019.