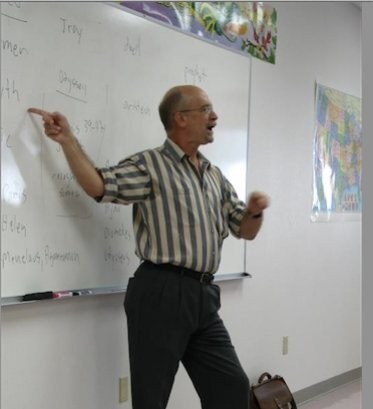 A Ph. D. in Comparative Literature from the University of California at Berkeley in 1990, while originally a Homerist interested in an Indo-European context, I gradually found more fruitful connections between Homer and the Near East in general, and the Bible in particular. Each of my first three books becomes progressively more involved with intersections between Homer and the Bible. My fourth book, Greek Myth and the Bible, argues that many biblical narratives originate in Greek culture.

I fell under the Odyssey's spell as an undergraduate, learning Greek to read it in the original.  As a graduate student I was under the influence of Nagy, but later began to question the importance of the Indo-European model, instead finding common ground between Homeric epic and Near Eastern myth (Gilgamesh, and Ugaritic myth especially) more fruitful.  I slowly came to realize that the Bible provided unexpected correspondences with many Homeric contexts, as I explore in my third book, Homer's Odyssey and the Near East.  As I considered the Bible more broadly, I found surprising parallels with many episodes in Hesiod, from both the Hebrew Bible and the New Testament, as well as with plays by Euripides, the Ion, Hecuba, and Alcestis, in particular, and multiple episodes that seem dependent on Ovid.  This became my most recent book, Greek Myth and the Bible.