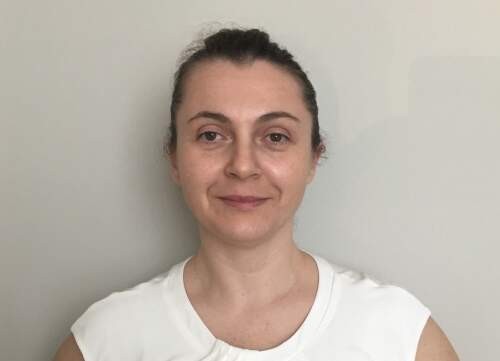 Izabela Luiza Ciesielska-Wrobel is a post-doctoral senior researcher at Ghent University, Department of Materials, Textiles and Chemical Engineering, and was a visiting scholar at North Carolina State University, College of Textiles, Textile Performance and Comfort Center (known as TPACC). She obtained her master's degree in Textile Engineering at Lodz University of Technology in Poland, where, after completing her PhD studies and PhD defense in 2007, she continued her studies on comfort in text

Dr Eng. Izabela L. Ciesielska-Wrobel was recently a Senior Assistant Researcher at the Smart
Textiles Group, Centre for Textile Science, at the Engineering Department of Materials, Textiles
and Chemical Engineering of Ghent University in Belgium.
She obtained her Master’s Degree in Textile Engineering at Lodz University of Technology in
Poland, at which, after completing both her PhD studies and defense in 2007, she continued her
study of comfort in textiles, protective textiles and the haptic perception of textiles, as an
Assistant Professor and Adjunct. Later she continued her work at universities in Belgium, France
and the US.
She has published over 50 studies, including refereed papers, conference materials, and a book
chapter, and is the co-holder of two patents. She is a reviewer for many textile journals and a
Vice-Editor and Member of the Scientific Board of the Autex Research Journal. She is also a
Member of the Editorial Boards of Fibers and Textiles in Eastern Europe.
She is a beneficiary of two prestigious and highly competitive European grants, namely the Marie
Curie Intra European Fellowship for Career Development (2010-2012), which was awarded in
support of a project titled “Creation of new methodology for the analysis of the influence of
textiles on human beings” and the Marie Curie International Outgoing Fellowship (2014-2017),
which was awarded in support of a project entitled “Modelling of human body and protective
textiles for estimation of skin sensorial comfort and life risk of fire-fighters working in extreme
external conditions”. Both grants were funded by the Research Executive Agency, which acted
according to powers delegated by the European Commission.
She has been involved in European Textile Engineering Advanced Master (E-TEAM) as a program
reviser and core tutor, lecturing in Computation Sciences and Engineering Principles for Textiles,
Textile Composite Structures for Impact Protection, and Comfort of Textiles. She was an advisor
to 20 Bachelor’s and Master’s students, and the co-promotor of four PhDs.
As a scientist with extraordinary abilities, Dr Izabela L. Ciesielska-Wrobel was awarded the right
to permanent residence in the United States of America.