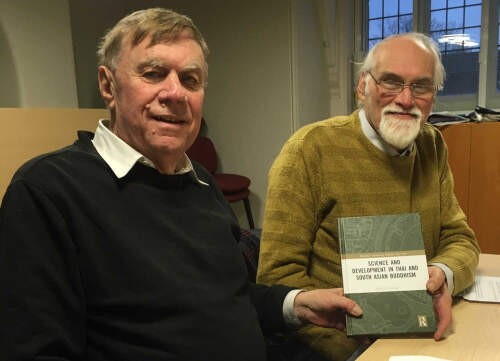 Dr
The University of Cambridge

David L. Gosling is a Life Member and former Spalding Fellow of Clare Hall, University of Cambridge. A Chartered Physicist, he was Director of Church and Society at the World Council of Churches in Geneva, and has published extensively on the interface between science and religion in Asia. He is the author of Religion and Ecology in India and Southeast Asia and Science and the Indian Tradition: When Einstein met Tagore (both Routledge).

David L. Gosling was a state scholar from Hymers College, Hull, who went to Manchester University to read physics followed by research in nuclear physics. He was also involved as a research assistant at the Jodrell Bank radio telescope in an experiment to bounce radio waves from the planet Venus. At this time he was appointed a chartered physicist.

From Manchester Dr Gosling went to Cambridge in 1964, where he obtained a degree in theology in part fulfilment of training for the ministry of the Church of England. He reverted to physics as a lecturer at Delhi University (St Stephen’s College) for four years, during which time he contributed extensively to the Indian media on science topics. He was part of a college mountaineering expedition which successfully climbed Manali Peak (18,600 feet).

Dr Gosling returned from India in 1969 to do a doctorate in religious studies at Lancaster University. He was ordained in 1973, and spent several years lecturing and undertaking anthropological research at Hull University. In 1982 he was a visiting fellow in energy studies at the East-West Center in Hawaii. In 1984 following government cuts he took voluntary severance of contract and moved to Geneva for five years as director of Church and Society of the World Council of Churches with responsibility for scientific and environmental issues, including nuclear power and AIDS. In 1986 he jointly organised the first international and ecumenical conference on AIDS.
In 1989 Dr Gosling returned to Cambridge, where he was on the staff of Great St Mary’s University Church, and was also appointed the first Spalding Fellow at Clare Hall in the University. He returned to Delhi in 1995 to complete his fellowship research, and also taught a new course in environmental physics at St Stephen’s College. Following a series of public lectures which he gave on nuclear power he was approached by a member of the Russian intelligence service (SVR) and asked to supply them with information about Britain’s nuclear waste disposal facilities. He did this for three years, but, unknown to the Russians, with the assistance of MI6.

Returning to Cambridge, Dr Gosling published two Routledge books about science and ecology and India’s religious traditions, and taught a course on ecological issues in South Asia for the B.Ed. degree in the Faculty of Education. He gave both the Teape seminars in Cambridge and the Teape lectures in India. From 2006 to 2010 he was principal of Edwardes College in the University of Peshawar, Pakistan, since when he has been back in Cambridge conducting seminars and continuing his research in the area of science and religion. In 2012 he contributed a paper on inter-faith aspects of embodied cognition at an ISSR conference in Loccum, Germany.