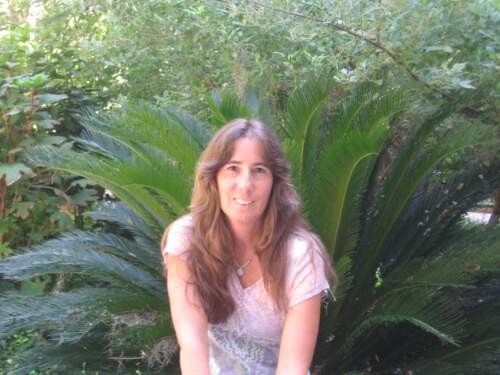 When I was a child, my favorite pastime was collecting seashells on the beach.  I don’t know why, but I was always fascinated by their beauty combined with function.  Somehow my roundabout career path led me to study seashells from a materials perspective, where I discovered that shells have amazing hierarchical structures that endow them with remarkable strength and toughness. These materials were of interest to me, not only because of their structure-property relationships, but because I serendipitously discovered an unusual crystallization process which I realized might help to explain how the thin tablet morphologies of mollusk nacre are formed.  Then, when I realized that the principles underlying the formation of CaCO3 biominerals could be extrapolated to the calcium phosphate (CaP) biominerals found in vertebrates, I became even more captivated with biominerals, because this revelation allowed me to venture into the biomedical arena.  Here, my contributions have been in gaining an understanding of how bones and teeth are formed, which we hope to capitalize on by building biomimetic bone substitutes.  I should say though, this has not been an easy career path, because if one peruses the literature in the biomineral field when I first entered (in the mid to late 1990s), you find that everyone was convinced that the unique crystal morphologies found in CaCO3 biominerals were caused by protein adsorption to specific crystallographic faces of the mineral.  Likewise, the bone community was convinced that proteins were nucleating hydroxyapatite via an epitaxial-like mechanism; again, assuming the molecular recognition capabilities of proteins was responsible for the elaborate biomineral structures.  So when I came along, as a lowly graduate student, and proposed a radically different hypothesis, it was not well received.  I had proposed that the acidic proteins were simply sequestering ions, and this then induced liquid-liquid phase separation, leading to nanodroplets of a highly hydrated amorphous mineral precursor.  I called this a polymer-induced liquid-precursor (PILP) process, and due to the fluidic character of the mineral precursor, it could be molded and shaped into non-equilibrium morphologies, many of which resembled various biomineral features that had long been an enigma in the field.   To me, a light bulb went off when I first discovered this PILP mineralization process, where it became immediately clear to me how these biomineral morphologies were formed.  But others did not see the light, so I have spent much of my career developing various in vitro model systems to support my hypotheses, because I am quite convinced that this non-classical crystallization process lies at the foundation of many biomineralization processes, ranging from the nanolaminated texture of mollusk nacre, to the intrafibrillar mineralization of collagen in bones and teeth, to the pathological biomineralization of kidney stones.  I believe the ability to mimic bone formation will allow us to synthesize the next generation bone substitute, which has both the mechanical properties like bone, as well as the ability to be resorbed and remodeled through the natural bone remodeling unit. In my biomimetic stone project, we are developing an in vitro model system to study to try and unravel the complex interplay between the large assortment of species found in urine  The overarching goal of my research program is to unravel the mechanisms that biological organisms use create to their exquisitely structured composites, in order to design novel composite materials. 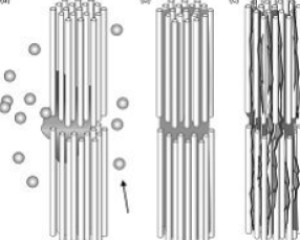 This article reviews the existing bone literature, with emphasis on the prevailing theories regarding bone formation and structure, which lay the groundwork for proposing a new model to explain how intrafibrillar mineralization of collagen can be achieved during bone formation. 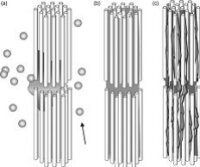 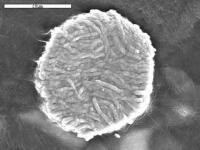 Intrafibrillar mineralization mechanism: Polypeptide sequesters ion clusters to form nanodroplets of hydrated mineral precursor (called PILP droplets), which adsorb to gap zones of a collagen fibril and get pulled inside by capillary action. The PILP precursor solidifies to amorphous calcium phosphate, and then crystallizes, leaving collagen fibril embedded with nanocrystals of hydroxyapatite.

TEM of unstained collagen fibrils. The contrast is obtained due to mineral incorporation. Spherical entities appear to be adsorbing to the fibril, which we believe are polymer-induced liquid-precursor (PILP) droplets.

The fibrillar texture of the collagen becomes pronounced once the fibrils are infiltrated with mineral.