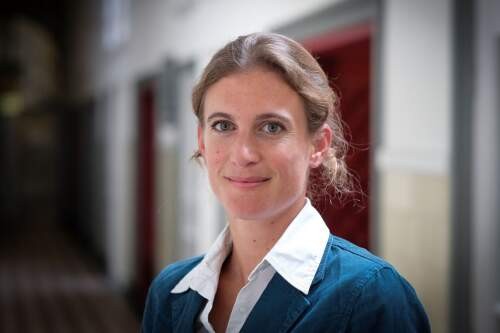 Aline Sierp is an Assistant Professor in European Studies at Maastricht University (NL). She holds a PhD in Comparative European Politics and History from the University of Siena (IT). Her research interests cover collective memory, questions of identity and European integration. Before joining the University of Maastricht, Aline Sierp worked as researcher at the Dachau Concentration Camp Memorial Site (DE). Aline is the co-founder and co-president of the Memory Studies Association.

Aline Sierp is Assistant Professor (tenured) in European Studies at Maastricht University. She is the co-founder and co-president of the Memory Studies Association and the Council of European Studies’ Research Network on Transnational Memory and Identity in Europe. She is co-editor of the Berghahn Book Series Worlds of Memory.

Aline Sierp holds a PhD in Comparative European Politics and History (cum laude) from the University of Siena (IT). Her MA in European History, Politics, Policy and Society (with distinction) was jointly awarded by the University of Bath (UK), Sciences Po Paris (FR) and the University of Siena (IT). Before joining Maastricht University, Aline Sierp worked as researcher at the Dachau Concentration Camp Memorial Site (DE) where she was responsible for human rights education in the international office. During her studies, she completed traineeships at the Council of Europe in Strasbourg, the United Nations in Turin and the German Embassy in Rome.

Aline Sierp's research interests cover collective memory after experiences of human rights violations, questions of identity and European integration. She has published widely on memory and identity issues and is the author of History, Memory and Transeuropean Identity: Unifying Divisions (Routledge, 2014, paperback 2017) and co-editor (with Christian Karner) of Dividing United Europe: From Crisis to Fragmentation (Routledge, 2019) and of Agency in Transnational Memory Politics (Berghahn, 2020, with J. Wüstenberg).