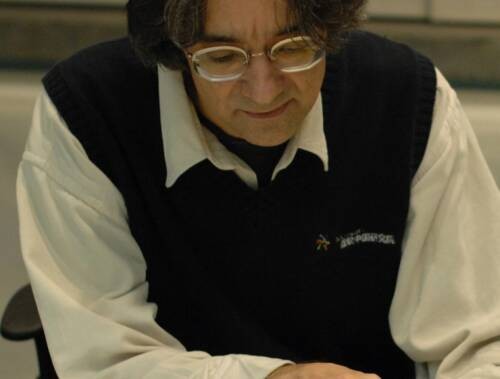 Luiz Velho is a researcher and professor at IMPA - Instituto de Matematica Pura e Aplicada of CNPq and the leading scientist of VISGRAF Laboratory.His experience in computer graphics spans the fields of modeling, rendering, imaging, and animation. He is the author of several books and has taught many courses on graphics-related topics.

Luiz Velho is a Full Researcher / Professor at IMPA - Instituto de Matematica Pura e Aplicada of CNPq , and the leading scientist of VISGRAF Laboratory. He received a BE in Industrial Design from ESDI / UERJ in 1979, a MS in Computer Graphics from the MIT / Media Lab in 1985, and a Ph.D. in Computer Science in 1994 from the University of Toronto under the Graphics and Vision groups.

His experience in computer graphics spans the fields of modeling, rendering, imaging and animation. During 1982 he was a visiting researcher at the National Film Board of Canada. From 1985 to 1987 he was a Systems Engineer at the Fantastic Animation Machine in New York, where he developed the company's 3D visualization system. From 1987 to 1991 he was a Principal Engineer at Globo TV Network in Brazil, where he created special effects and visual simulation systems. In 1994 he was a visiting professor at the Courant Institute of Mathematical Sciences of New York University. He also was a visiting scientist at the HP Laboratories in 1995 and at Microsoft Research China in 2002.

He has published extensively in conferences and journals of the area. He is the author of several books and has taught many courses on graphics-related topics. He is a member of the editorial board of various technical publications, and was the guest editor of the Special Issue on Computer Graphics of JBCS and of Computer & Graphics . He has also served on numerous conference program committees.

His awards include the "Ordem Nacional do Merito Cientifico" , a Honors Prize in the II Compaq Award for Computer Science and Prizes for Best Technical Videos and Best Papers at SIBGRAPI. In 1996 he was the Program Chair of the IX SIBGRAPI . He was distinguished as the first researcher in South America to be on the SIGGRAPH Papers Committee, in 1999. He served in the SIGGRAPH Papers Committee also in 2000, 2002 and 2003. He was a member of the Eurographics IPC in 2008. He received the prestigious grant award "Cientista do Nosso Estado" from FAPERJ in 2004, 2007 and 2009. He has been a Keynote Speaker in several conferences, including SGP 2005, CNMAC 2006, the SBPC Congress 2006, SIBGRAPI 2007, ISMM 2007, and WVC 2010 .