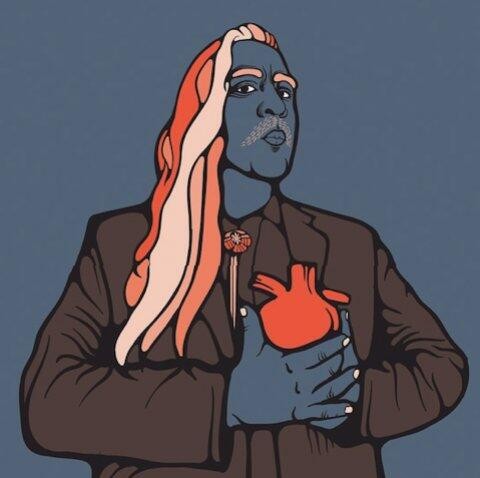 Born in México City, Gómez-Peña moved to the US in 1978, and since 1995, his three primary homes have been San Francisco, Mexico City and “the road", what he considers his “personal bermuda triangle”. His performance work and 21 books have contributed to the debates on cultural, generational, and gender diversity, social justice from a Latinx perspective, border culture and North-South relations.

Gómez-Peña’s art work has been presented at over one thousand venues across the US, Canada, Latin America, Europe, Russia, South Africa and Australia. A MacArthur Fellow, USA Artists Fellow, and a Bessie, Guggenheim, and American Book Award winner, he is a regular contributor to newspapers and magazines in the US, Mexico, and Europe and a contributing editor to The Drama Review (NYU-MIT), the Performance Art Week Journal of the Venice Biennale, and emisférica, the publication of the Hemispheric Institute of Performance and Politics (NYU). Gómez-Peña is currently a Patron for the London-based Live Art Development Agency, and a Senior Fellow in the Hemispheric Institute of Performance and Politics.

As of 2021, Gómez-Peña is working with his extended troupe on multiple reenactments of his "living archives" project, publishing two anthologies, a new enhanced Pocha Pedagogy book (with Saul Garcia Lopez) and creating a border opera titled "WE ARE ALL ALIENS" (featuring classical concert pianists and Mariachis) A documentary portrait of his beloved troupe in collaboration with filmmaker Amber Bemak is in the works.

PSYCHOLOGICAL PROFILE (PROVIDED BY THE FBI): Financially impaired, sexually exalted, insecure & defensive regarding his masculinity, (queer tendencies), good polemicist, & according to his own deranged subjectivity, “he loves to talk back to all forms of authority.”

IF YOU SEE HIM IN TOWN, PLEASE CHECK OUT HIS SO CALLED “LIVE ART PERFORMANCES” & REPORT BACK TO YOUR LOCAL HOMELAND SECURITY OFFICE. 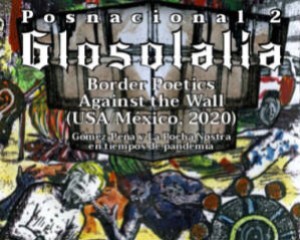 La Pocha Nostra is thrilled to announce the virtual publishing of a new bi-national anthology of experimental literature. For this book, we chose a DIY model of transnational publishing, therefore, avoiding the red tape of formal publishing houses & related politics! It is for sale for 13 USD. A downloadable version of the book is available after purchase. 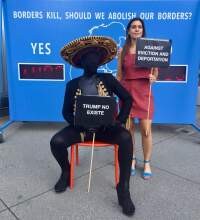 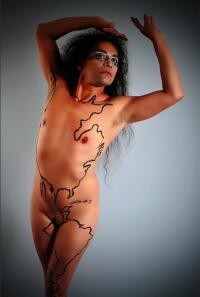 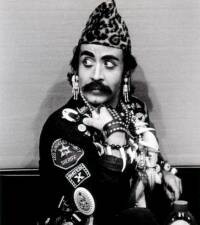 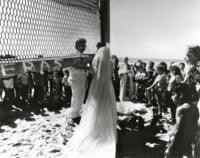 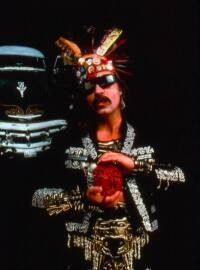 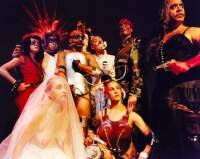 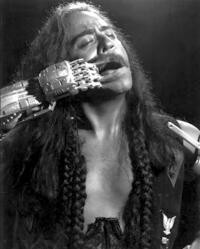 Body Map of the Americas by La Saula

The classic portrait of GP as “Border Brujo,” San Diego/Tijuana, 1988.

Emily Hicks & Gómez-Peña. Border Wedding right where Border State Park meets with Playas de Tijuana. with guests on both sides of the border, 1988.

From The Year of the White Bear, Walker Arts Center, Minneapolis, 1992

Gómez-Peña during lock-down at his home broadcasting studio, San Francisco.