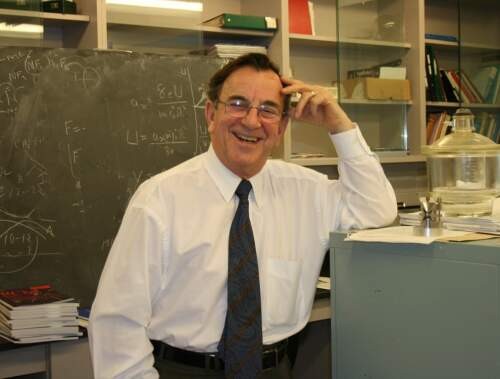 Raymond E. March, PhD, DSc, D(hc), FCIC, is presently Professor Emeritus of Chemistry at Trent University in Peterborough, ON, Canada. He retired in 1999 and has pursued subsequently an active research and graduate teaching program. His current research interests are focused within Trent University’s Water Quality Centre (www.trentu.ca/wqc/), of which he was a founding member.

From 1954-57, Dr. March was a Cadet Pilot in the Leeds University Air Squadron (RAFVR) and, from 1958-63, a Flight Lieutenant in the RCAF (AUX).  From 1960-61, he held a Canadian Industries Limited Research Fellowship. From 1962-63, he was a Post-Doctoral Fellow with Prof. H.I. Schiff at McGill University, and a Research Associate from 1963-65, during which time he lectured at McGill University and Loyola College.  In 1965, he joined the faculty of Trent University where he has conducted independent research for some 47 years in gas-phase kinetics, optical spectroscopy, gaseous ion kinetics, analytical chemistry, nuclear magnetic resonance spectroscopy, and mass spectrometry. Ray and his wife, Kathleen, have been married for 54 years; they have three daughters, Jacqueline, Roberta, and Sally with spouses Paul, Stuart, and Lauren, respectively, and nine grandchildren, Shawn (married to Lisa I), Jessica, Thomas (married to Lisa II), Daniel, Rebecca, Sara, James, Madeline, and Carson, in order of appearance.

His principal research interest lies in the mass spectrometric and nuclear magnetic resonance spectroscopic investigation of natural compounds that, having been formed by plants, may enter waterways and/or the water table.  Current research involves the study of flavonoids and flavonoid glycosides; such compounds are found often in those products that have become known as neutraceuticals.  At present, Dr. March is carrying out a mass spectrometry/ion mobility spectrometry study of protein noncovalent complexes together with an investigation of volatile compounds formed by Ash trees in response to attack by the Emerald Ash Borer.

Opposing the arbitrarily-selective operation of the Discovery Grants program of the Government of Canada, gardening, dining in France, and trying to play tennis almost anywhere.