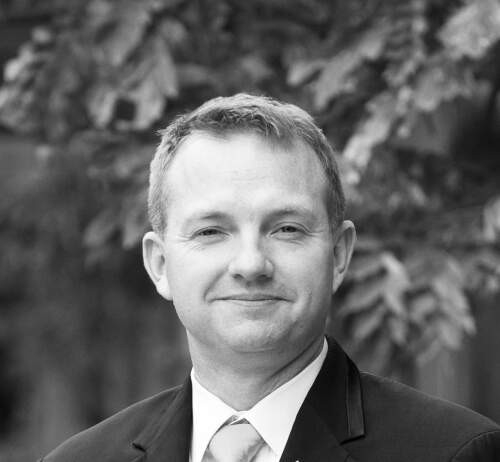 R.T Wyant is a forensic scientist in Washington State and has been studying the capabilities and limitations of less lethal devices since 2003. He published several scientific papers on the topic and has court qualified as a subject matter expert. Wyant developed forensic testing protocols and has analyzed evidence related to field deployments of less lethal force options. He has taught all over the US and abroad including the UK, Belgium, the Netherlands, and Australia.

RT Wyant received his Master’s Degree in 1994. He has been a forensic scientist since 1995 and a reserve deputy since 2000 for the Snohomish County Sheriff’s Office.
He currently supervises the forensic firearms unit at the Washington State Patrol-Seattle crime laboratory and is court qualified in firearm/tool identification, crime scene analysis, less lethal devices, and trajectory reconstruction. Since 2001, Rick has developed testing protocols for less lethal weapons that have been utilized by CEW (TASER), OC (pepper spray), and less lethal impact munitions manufacturers. His standard operating procedures for TASER evidence analysis have been adopted by other crime laboratories. Wyant established foundational criteria for the admissibility of forensic TASER evidence under the FRYE standard.

Rick has taught police agencies, scientists, students and attorneys all over the US and abroad including the United Kingdom, Belgium, the Netherlands and Canada. He published several scientific papers and in 2012 he assisted with the Atlas of Conducted Electrical Weapon Wounds and Forensic Analysis where he authored Chapter 10.

He is a distinguished member of the Association of Firearm and Tool mark Examiners, an associate member of the American Academy of Forensic Sciences, a board member of the Scientific Working Group for Firearms and Toolmarks(SWGGUN). He also sits on the NIJ Technology Working Group (TWG) for less lethal weapons, and the International Law Enforcement Forum (ILEF).

Wyant is a distinguished member of the Association of Firearm and Tool Mark Examiners (AFTE), an associate member of the American Academy of Forensic Sciences (AAFS), a board member of the Scientific Working Group for firearms and tool marks (SWGGUN). He also sits on the NIJ Technology Working Group (TWG) for less lethal weapons, and the International Law Enforcement Forum (ILEF).
As a reserve deputy, he has performed solo patrol functions, bicycle patrol, worked a Search & Rescue Cadaver K9, and has deployed TASERs in the field. 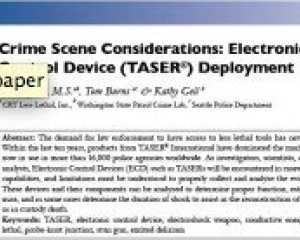 As investigators, scientists, and crime scene analysts, Electronic Control Devices (ECD) such as TASERs will be encountered in casework. Their role, capabilities, and limitations must be understood to properly collect and analyze the evidence involved. These devices and their components can be analyzed to determine proper function, establish a hit or a miss, and in some cases determine the duration of shock to assist in the reconstruction of a field “failure” or in custody death. 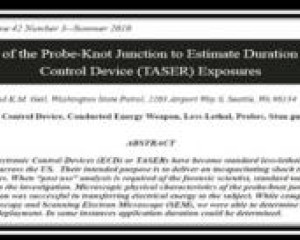 Examination of the Probe-Knot Junction to Estimate Duration of TASER

When post use analysis of TASER is required, standard tools can be employed to assist in the investigation. Microscopic physical characteristics of the probe/knot junction can determine if the TASER application was successful in transferring electrical energy to the subject. While comparing samples using stereomicroscopy and Scanning Electron Microscope (SEM), we were able to determine if a patent circuit was completed during the deployment. 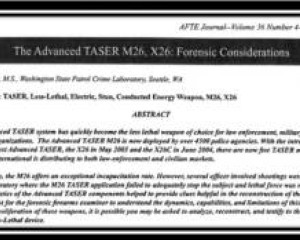 The Advanced TASER M26 is now deployed by over 4500 police agencies. Statistically, the M26 offers an exceptional incapacitation rate. Several officer involved shootings were submitted where the M26 TASER application failed to adequately stop the subject and lethal force was necessary. It is important for the forensic firearms examiner to understand the dynamics, capabilities, and limitations of this device in order to reconstruct the event.

A musical montage of some of the extensive testing that was performed to flame test many types of chemical defense sprays (pepper spray) vs. TASER (Chapter 4).

A sample of the testing protocol employed to evaluate less lethal projectiles. Some volunteered to experience effects of the BIP by Security Devices International. Our research helped steer the development of the round.