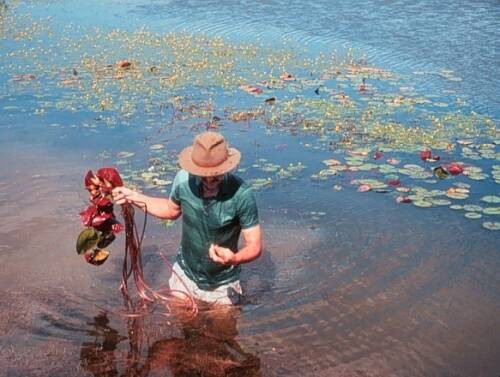 Shown here collecting tropical water-lilies in the 1980's, I have devoted much of the past 3 decades to developing a resource on economic plants for the USDA’s national gene bank system via its GRIN database. By this effort the GRIN Taxonomy website is widely recognized as an reliable source of information on economic plants and I have gained global stature as a specialist in plant nomenclature.

The last 28+ years of my professional life have been spent developing an extensive and exhaustive taxonomic resource on economic plants, especially those important to global agriculture. This activity has been carried out through my role as “curator” of taxonomic data for the USDA’s national germplasm system’s GRIN database < http://www.ars-grin.gov/cgi-bin/npgs/html/index.pl>. The volume of data compiled, chiefly through my own efforts, during this time is staggering, and now includes over 28,000 generic-level and 100,000 species-level records; with an additional 64,000 multilingual common names; and 485,000 distribution, 430,000 literature, and 29,000 economic use records. Considerable effort has been made to compile these data in adherence to global taxonomic database standards, with ongoing verification in order to accommodate and document the most recent taxonomic and nomenclatural information. Further focus has been directed towards providing thorough representation of all groups of economic plants, including those used for food or food-additives, forage, fuel, medicine, ornament, timber, erosion-control, and many other positive economic uses, as well those with negative economic consequences, such as weeds or poisonous plants. As the pool of data has grown over time, so too has the global standing of GRIN Taxonomy as an accurate source of taxonomic information on economic plants. This perception has been furthered through my own software efforts in developing the GRIN Taxonomy website as a user-friendly, multilingual interface seamlessly interlinking to numerous other useful databases and providing direct and timely response to user feedback and/or queries. It has also surely benefited from my editorial involvement with international botanical nomenclature and both the botanical and cultivated plant codes of nomenclature.

As a consequence, GRIN Taxonomy now provides nearly 30,000 taxon reports to users each day, serving as an effective and trusted conduit of information from the taxonomic world to the world at large. GRIN users comprise a broad range of scientists and non-scientists seeking authoritative information on economic plants, such as what they are called and why, what they are related to, where they grow, how they are used, what they look like, and where other information on them might be found. Numerous public or private agencies or organizations are regular consumers of GRIN Taxonomy data, both at the domestic and international level, comprising workers at universities, governmental agencies, professional societies, botanical gardens and arboreta, natural heritage programs, gene banks, and seed and biotech companies, among others. Examples of these include the International Seed Testing Association and the Association of Official Seed Analysts member laboratories, Bioversity International, the Commonwealth Agricultural Bureau International, Agriculture & Agri-food Canada, International Union for the Protection of New Varieties of Plants, the National Center for Biotechnology Information, the European Food Information Resource, the U.S. Food and Drug Administration, and the USDA Animal and Health Inspection Service. Individual users include botanists, ecologists, entomologists, mycologists, anthropologists, professors, students, librarians, agronomists, horticulturalists, foresters, weed scientists, landscape architects, nurserymen, museum curators, technical writers & editors, herbalists, artists, gardeners, and farmers from many different countries. I personally answer several hundred user queries each year, seeking information on taxonomy, nomenclature, and many other plant-related items. A full appreciation of how GRIN Taxonomy is used has been gleaned, not from my own assessment, but from over 500 comments that have been received from users in the last several years, when their submission was actively encouraged on the website.

No discussion of my botanical activities would be complete without some mention of my major botanical interest, the water-lilies. My longstanding taxonomic involvement with this group has fueled a number of scientific collaborations, numerous field expeditions, and 30 years of water-lily species cultivation, from which material has been donated to the Denver and Berlin Botanic Gardens for long term conservation. Over this time I have served as a consultant to the International Waterlily Society (now International Waterlily and Water Gardening Society), to a number of water-lily hobbists, and more recently with Water Gardeners International. Some of this latter involvement is detailed on the web at