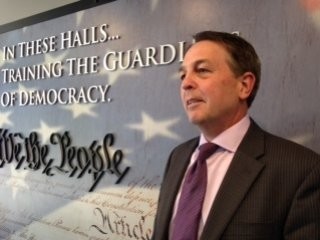 Bradley R. Graham grew up in Chicago, Illinois.   In 1980, he joined the U.S. Marine Corps where he served for 7 ½ years on active duty.  In 1987, he joined the Santa Ana Police Department (CA) as a Police Officer working in the Patrol Division.

In 1989, he transferred to the Tacoma Police Department (WA).   He served as a Police Patrol Officer in the Operations Division for several years before being selected as an Instructor at the Basic Law Enforcement Academy for the Washington State Criminal Justice Training Commission.   While at the Academy, he taught classes on communications, patrol procedures, and family violence investigations.

In 1997, he was promoted to Detective and assigned to the Tacoma Police Department’s Criminal Investigations Division.   Initially assigned to the Domestic Violence Unit, he worked felony and misdemeanor cases of family violence.    In 2000, he transferred to the Special Assaults Unit where he worked cases involving sexual assault and child abuse.    He was invited back to the Academy as an adjunct faculty member teaching the course on abuse investigations.   In 2003, he went to polygraph school and became a certified polygraph examiner and was assigned to the Homicide Unit.    In 2005, he returned to the Special Assaults Unit where he is currently assigned.   He specializes in investigating child fatalities and child sexual/physical abuse cases.   He is the senior Detective in the unit and has created a training program for newly assigned Detectives to the SAU teaching an understanding of the dynamics of abuse investigations and child death investigations.

Bradley Graham continues to teach at the Academy as an adjunct faculty member teaching courses in Sex Crimes Investigations and Child Abuse Investigation at both the basic and advanced levels.   Additionally, he presents training, both locally and nationally, regarding child abuse, sex crimes, domestic violence, interview and interrogation, crisis intervention and the use of DNA in investigations.    He is a core faculty member and practicum leader for the American Professional Society on the Abuse of Children’s (APSAC) Child Forensic Interview Clinic.  He has presented case studies at various state and national conferences.

Detective Graham has a Master’s degree in Law and Justice from Central Washington University (Washington State).

Detective Graham is a strong advocate for the multidisciplinary team approach to child abuse and was instrumental in the creation of the protocols used at the Pierce County’s Child Advocacy Center at Mary Bridge Hospital in Tacoma.