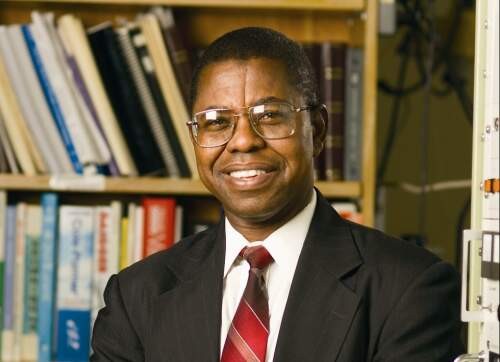 Deji Badiru is the Dean and senior academic officer for the Graduate School of Engineering and Management at the Air Force Institute of Technology (AFIT).  He is responsible for planning, directing, and controlling all operations related to granting doctoral and master’s degrees, professional continuing cyber education, and research and development programs.  In his post-high-school days, Deji worked as a graphic artist for children television programs, as a writer and columnist for community newspapers, and as an accounts clerk.  These are practical skills that he frequently uses, even today, in his administrative and professional duties.

Deji Badiru has won several awards for his teaching, research, and professional accomplishments.  He is the recipient of the 2009 Dayton Affiliate Society Council Award for Outstanding Scientists and Engineers in the Education category with a commendation from the 128th Senate of Ohio.  He also won 2010 IIE Joint Publishers Book-of-the-Year Award from the Institute of Industrial Engineers.  He also won 2010 ASEE John Imhoff Award for his global contributions to Industrial Engineering Education, the 2011 Federal Employee of the Year Award in the Managerial Category from the International Public Management Association, Wright Patterson Air Force Base, the 2012 Distinguished Engineering Alum Award from the University of Central Florida, and the 2012 Medallion Award from the Institute of Industrial Engineers for his global contributions in the advancement of the profession. In February 2013, he was selected as a finalist for the Jefferson Science Fellows (JSF) program by the US National Academy of Sciences and the US Department of State. Prof. Badiru was the leader of the AFIT team that won the 2013 Air Force Organizational Excellence Award for Air University C3 (Cost Conscious Culture). His most recent award is the 2015 National Public Service Award at the overall US Air Force level.

Deji Badiru has served as a consultant to several organizations around the world including Russia, Mexico, Taiwan, Nigeria, Ghana, and Canada.  He has conducted customized training workshops for numerous organizations including Sony, AT&T, Seagate Technology, U.S. Air Force, Oklahoma Gas & Electric, Oklahoma Asphalt Pavement Association, Hitachi, Nigeria National Petroleum Corporation, and ExxonMobil.  He holds a leadership certificate from the University Tennessee Leadership Institute.  He has served as a Technical Project Reviewer, curriculum reviewer, and proposal reviewer for several organizations including The Third-World Network of Scientific Organizations, Italy, National Science Foundation, National Research Council, and the American Council on Education.   He is on the editorial and review boards of several technical journals and book publishers. Deji has also served as an Industrial Development Consultant to the United Nations Development Program.  He is also a program evaluator for ABET, the international engineering and technology accreditation body.  In 2011, Prof. Badiru led a research team to develop analytical models for Systems Engineering Research Efficiency (SEER) for the Air Force acquisitions integration office at the Pentagon.  He has led a multi-year composite manufacturing collaborative research between the Air Force Institute of Technology and Wyle Aerospace Group.

Deji Badiru has diverse areas of avocation.  His professional accomplishments are coupled with his passion for writing about everyday events and interpersonal issues, especially those dealing with social responsibility.  Outside of the academic realm, he writes motivational poems, editorials, and newspaper commentaries; as well as engaging in paintings and crafts. As a contribution to sparking the interest of kids in science and engineering, Deji runs the Physics of Soccer website (www.physicsofsoccer.com). He is the founder of the Association of Military Industrial Engineers (AMIE).  He also runs ABICS Publications, through which he publishes non-technical guide books for home, work, and leisure. A prolific researcher and author, Deji espouses the spirit of sharing knowledge freely and widely, which is the reason he offers self-published guide books to make his publications affordable and accessible to the general public.