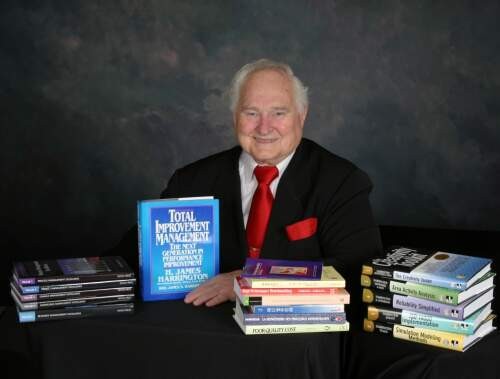 Dr. Harrington has authored over 55 books and numerous software packages related to organizational performance improvement. He worked for IBM for 40 years and was a principal at Ernst & Young for over 10 years. He was CEO of SystemCorp Inc., a project management software development company, and Define Properties, an organization that designed and built 30 to 60 stories tall buildings. He served as President and Chairman of the Board for The American Society for Quality and International Academy

In the book, Tech Trending, Dr. Harrington was referred to as “the quintessential tech trender.”  The New York Times referred to him as having a “…knack for synthesis and an open mind about packaging his knowledge and experience in new ways – characteristics that may matter more as prerequisites for new-economy success than technical wizardry….”  The author, Tom Peters, stated, “I fervently hope that Harrington’s readers will not only benefit from the thoroughness of his effort but will also ‘smell’ the fundamental nature of the challenge for change that he mounts.”  William Clinton, Past President of the U.S., appointed Dr. Harrington to serve as an Ambassador of Good Will.  It has been said about him, “He writes the books that other consultants use.”
Harrington Management Systems (formerly Harrington Institute) was featured on a half-hour TV program, Heartbeat of America, which focuses on outstanding small businesses that make America strong.  The host, William Shatner, stated: “You (Dr. Harrington) manage an entrepreneurial company that moves America forward.  You are obviously successful.”
Dr. Harrington is recognized as one of the world leaders in applying performance improvement methodologies to business processes.  He has an excellent record of coming into an organization as its CEO or COO, resulting in a major improvement in its financial and quality performance.

Experience
Dr. H. James Harrington now serves as the Chief Executive Officer for the Harrington Management Systems with branches in many countries around the world.  He also serves as the Chairman of the Board for a number of businesses.
In February 2002 Dr. Harrington retired as the COO of Systemcorp A.L.G., the leading supplier of knowledge management and project management software solutions. Prior to this, he served as a Principal and one of the leaders in the Process Innovation Group at Ernst & Young.  Dr. Harrington was with IBM for over 40 years as a Senior Engineer and Project Manager.
Dr. Harrington is past Chairman and past President of the prestigious International Academy for Quality and of the American Society for Quality Control.  He is also an active member of the Global Knowledge Economics Council.
While H. James Harrington was Chairman of ASQ, he was one of the leaders in getting the Malcolm Baldrige National Quality Award through Congress and approved by the President of the U.S.  He also served as the first Treasurer of the Malcolm Baldrige Consortium that set up and developed the award.


Credentials:
H. James Harrington was elected to the honorary level of the International Academy for Quality, which is the highest level of recognition in the quality profession.  H. James Harrington is a government-registered Quality Engineer, a Certified Quality and Reliability Engineer by the American Society for Quality Control, and a Permanent Certified Professional Manager by the Institute of Certified Professional Managers.  He is also a certified Master Six Sigma Black Belt and earned the title of “Six Sigma Grand Master”.  H. James Harrington has an MBA and Ph.D. in Engineering Management and a BS in Electrical Engineering.
He was appointed the honorary advisor to the China Quality Control Association, and he was elected to the Singapore Productivity Hall of Fame in 1990.  He has been named lifetime honorary President of the Asia Pacific Quality Organization and honorary Director of the Association Chilean de Control de Calidad.  In 2006 Dr. Harrington accepted the Honorary Chairman position of Quality Technology Park of Iran. In 2008 Dr. Harrington was awarded the Sheikh Khalifa Excellence Award (UAE) in recognition of his superior performance as an original Quality and Excellence Guru who helped shape modern quality thinking.  In 2009 Harrington was selected as the Professional of the Year (2009).  Also in 2009 he received the Hamdan Bin Mohammed e-University Medal. In 2010 the Asian Pacific Quality Association (APQO) awarded Harrington the APQO President’s Award for his “exemplary leadership.” The Australian Organization of Quality NSW’s Board recognized Harrington as “the Global Leader in Performance Improvement Initiatives” in 2010.
Dr. Harrington has been elected a Fellow of the British Quality Control Organization and the American Society for Quality Control.  In 2008 he was made an Honorary Fellow of the Iran Quality Association and of the Azerbaijan Quality Association.  He was also elected an honorary member of the quality societies in Taiwan, Argentina, Brazil, Colombia, Chile and Singapore.  He is also listed in the “Who’s – Who Worldwide” and “Men of Distinction Worldwide.”  He has presented hundreds of papers on performance improvement and organizational management structure at the local, state, national, and international levels.

Dr. Harrington’s contributions to performance improvement around the world have brought him many honors and awards, including the Edwards Medal, the Lancaster Medal, ASQ’s Distinguished Service Medal, China’s Magnolia Award and many others.


Contact Information:
Dr. Harrington is a very prolific author, publishing hundreds of technical reports and magazine articles.  He has authored 55 books, and 10 software packages. His e-mail address is [email protected]

Reducing waste and bureaucracy within government and private organizations to make them more efficient, effective, adaptable and more enjoyable place to work in.

Reducing waste and bureaucracy within government and private organizations to make them more efficient, effective, adaptable and more enjoyable place to work in.