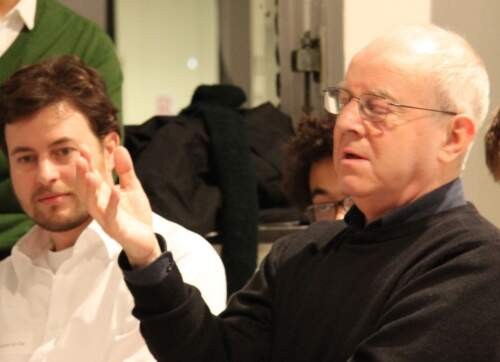 I am an architect and live in Cambridge, UK. My academic life has been spent at the schools of architecture in Cambridge and Cardiff. My research for the past 20 years has been concerned with the relationship between technology and history/theory in environmental design in architecture and this is the subject of my books. I have been invited to lecture on my work by universities in the UK, Europe, Asia and north America.

I was educated at the Regional College of Art, Manchester and Clare College, Cambridge.  From 1965 to 1995 I taught and researched at the Department of Architecture at Cambridge and, in 1967, was a founder member of the Martin Centre for Architectural and Urban Studies and later its Director.  Between 1995 and 2002 I was professor of architectural design at the Welsh School of Architecture, Cardiff University.  I then returned to Cambridge as fellow of Darwin College, and since 2005 as emeritus fellow.

Throughout my academic life I have worked on aspects of the environment in buildings, first in computer modelling, field studies and passive solar design.  In the past 20 years my interest has been to explore the relationship between the quantitative and qualitative aspects of environment and this is the subject of my recent books and papers.  In addition I have researched and published on aspects of the architecture of the Arts and Crafts movement in Britain.

I have been invited to teach at schools of architecture around the world and have held five visiting professorships at schools in Hong Kong, Singapore, Glasgow, Huddersfield and Leicester.
For most of my life I have worked in architectural practice in parallel with my academic work and my buildings, many in partnership with Stephen Greenberg, have been widely published and exhibited.  They have received four RIBA Architecture Awards.

I was given the PLEA Award 2000 in recognition of my work in design, research and teaching of environmental architecture.  In 2002 I received a Leverhulme Emeritus Research Fellowship to study 'The Environmental Function of Architecture'.  In 2010 the RIBA presented me with the Annie Spink Award for my contribution to architectural education.

I have a broad interest in literature, fine art and music and, in particular, the relationship between these and questions of architecture.