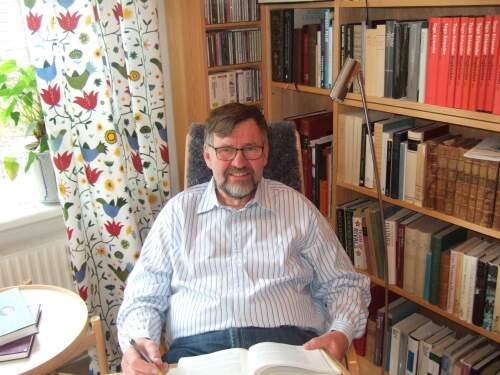 Studies in Economics, Mathematics and Philosophy. Lecturer Economics since 1976. Political work; international, national regional and local levels. Experience in business; mainly shipping, CEO shipping line and consultant on implementing high technology. Author on four books on the interrelation between the financial and real spheres of the economy. From 2011 work as Senior Researcher.

Born 1946. Married since 1970, two children
BA Mathematics and Economics 1974
Graduate Studies in Mathematics and Macroeconomics.
Lecturer at University of Gothenburg since 1979, Dept. of Economics at School of Economics until 1988, School of Public Administration until retired 2011, now active as a senior lecturer. Most of the time I have had part time work or been on leave, particularly during the 1990s.

During 1982 – 1991 elected member of the Local Government in the City of Uddevalla.

Working as consultant since 1989. Consultant tasks concern a wide range of areas such as education, financing free schools (National Board of Education), local government finance (Swedish Association of Local Authorities and Regions), state accounting systems (Parliamentary Auditors), high technology (Russia and Tunisia) and the interface between sea and land transports, (Group of North Sea and Mediterranean Harbours), EU-projects on “on the job training” and education and investment aiming towards organizing national statistics in Kirgizia.
Courses for political organisations, industry organisations and trade unions on different matters.

Conference organizing: Economic Modelling, 1992, and Swedish Entrance to European Union, 1992, Conversion of Military High Technology in Russia, 1993. The latter a part of a consultant project on transforming military high technology into civilian use with MINATOM Russia and some British banks under the auspices of the Swedish government, between 1993 and 1995.

During 1995-99 CEO for Scandinavia France Line, a Shipping Line between Sweden and France.

1988 Interaction between economic growth and financial flows: A presentation of a model
analysing the impact of short term financial disturbances on economic growth. (Co-author Lars Westberg).
In "Economic Modelling in the OECD Countries" ed. H.Motamen, Chapman&Hall.

2010
Money, Uncertainty and Institutions - on the Interrelations between Economic and Social Stability
EAEPE 2010, European Assocation for Evolutionary and Political Economy, "The economic crisis and the renewal of the European model(s) - Revisiting the debate on varieties of capitalism", Bordeaux 28-30 October 2010

2007
From Invisible Hand to Perpetuum Mobile - The Problem of Economic Growth
EAEPE Conference in Porto, November 2007

Do variations in employment influence the consumption of alcoholic beverages
International Symposium on Health Economics, Lisbon, 1984