Dr. John Foubert has written 9 books, including his current title "Lessons Learned: How to Avoid the Biggest Mistakes Made by College Resident Assistants." He has written 7 books about sexual assault prevention, and is currently writing a book about the effects of pornography. He is featured regularly on CNN, NPR, the Huff Post, and other national media. He serves as national president of One in Four (www.oneinfourusa.org) and travels worldwide to speak and train.

Dr. Foubert has written 9 books, 7 of which deal with the prevention of sexual assault.  He is currently writing his tenth book, titled The Effects of Todays Pornography: Perspective, Repercussions, and Recovery.  His federally funded, interdisciplinary research program has produced 38 articles in some of the most respected peer reviewed journals in both Education and Psychology.  He was the first scholar to document a reduction in rape resulting from a prevention program.  Dr. Foubert has given over 200 professional presentations to conferences, universities, community and military organizations worldwide.

In 1998, he and a group of colleagues founded One in Four.  One in Four is a non-profit organization dedicated to ending rape through means shown to be most effective through scientific research. During the last two decades, Dr. Foubert’s rape prevention programs have been used by countless universities, state health departments, and military units worldwide.

Dr. Foubert has testified before House of Representatives Armed Services Committee Subcommittee on Military Personnel on the issue of rape prevention, and has been called upon by the White House and the Pentagon for his expertise in rape prevention.  He consults regularly with the military and with colleges about how to apply research-based approaches to significantly lower rape in their communities.  He is appears in the national media on camera or in print at least weekly in outlets such as CNN, The New York Times, The Atlantic, The Houston Chronicle, and U.S. News and World Report.  Dr. Foubert is also a blogger for the Huffington Post.  He can be reached at [email protected] 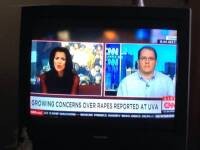 One hour interview on C-Span about Rape on Campus

John Foubert on C-Span regarding preventing sexual violence on campus.

Video of my interview with Don Lemon on CNN Newsroom

After a gang rape at UVA, I was interviewed by Don Lemon on CNN.

Talking on CNN with Fredricka Whitfield

My interview with Fredricka Whitfield (a great anchor) on CNN.

I was recently a guest on CNN with Don Lemon, speaking about fraternities and sexual assault.