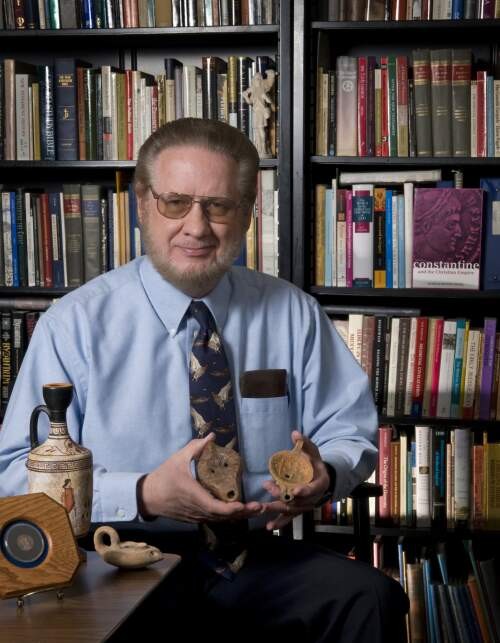 Dr. Charles M. Odahl earned advanced degrees in the California University system in Roman, early Christian, and Medieval History and Classical Languages. He has devoted his life and career to studying and teaching ancient classical and early Christian history. He has traveled, researched and lived all across Europe and the around the Mediterranean Basin, and written 5 books and 50 journal articles and reviews on Roman, early Christian and Byzantine history, language, religion and culture.

Dr. Charles Matson Odahl received BA and MA degrees in European History and Classical Languages from California State University, Fresno; and a doctorate in Greek, Roman and Medieval History (with field work in Roman numismatics and archaeology) from the University of California, San Diego. He served as Professor of Ancient and Medieval History, and Classical and Patristic Latin at Boise State University in Idaho for over thirty years; and also taught Roman and Medieval History at the University of Avignon in France, at Bath College of Higher Education in Britain, and at Oregon State University in Oregon. His main research interests are Cicero and the late Roman Republic, early Christianity, and Constantine and the early Byzantine Empire. He has traveled, lived, studied and taught throughout Europe and the around the Mediterranean Basin, and examined the extant texts, coins, artifacts, and monuments relevant to the Roman, early Christian and Byzantine Eras in the major museum collections and archaeological sites around the world. His publications include 50 articles and reviews in scholarly journals and major books on Cicero and the Catilinarian Conspiracy (New York: Routledge, 2010 Hb, 2011 Pb), Early Christian Latin Literature (Chicago: Ares, 1993 Pb), and his best selling work on Constantine and the Christian Empire (London: Routledge, 1st ed. Hb 2004, Pb 2006; 2nd ed. Hb 2010, Pb 2013 - also available in e-books, and Romanian, 2006, Serbian, 2013, & Polish, 2015, translations).

Dr. Odahl has given hundreds of papers and presentations across the country to professional associations, such as the American Historical Association, the American Catholic Historical Association, the American Society of Church History, the Rocky Mountain Medieval and Renaissance Association, the Classical Association of the Pacific Northwest and the Northwest Early Christian Studies Seminar; and to local groups, such as the Idaho Historical Museum, the Lutheran Pastors' Association of the Northwest, the Medieval Society of Idaho, and numerous churches and fraternal organizations. He has appeared on British, Polish, and American television in historical programs, and been the subject of dozens of newspaper and magazine articles relevant to his specialties of Roman, early Christian and Byzantine history, religion, and art. He resides in the Pacific Northwest, writes part time at his home, lectures part time across the country on his books and research specialties, and enjoys jogging, biking & swimming, and watching classic film noir mysteries and British romance period movies as much as possible.