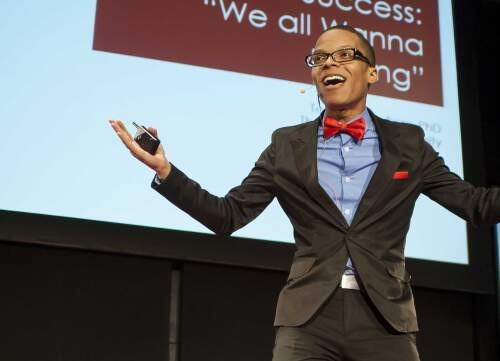 Terrell L. Strayhorn, PhD is Professor of Higher Education at The Ohio State University (OSU), where he also serves as Director of the Center for Higher Education Enterprise (CHEE), Senior Research Associate in the Kirwan Institute for the Study of Race & Ethnicity, and Faculty Affiliate in the Todd A. Bell National Resource Center on the African American Male and the Criminal Justice Research Center. He has faculty appointments in the John Glenn School of Public Affairs, Department of African American and African Studies, and Education Policy, Engineering Education, and Sexuality Studies programs.  He also served as founding director of the Center for Inclusion, Diversity & Academic Success (iDEAS) within the College of Education and Human Ecology. Prior to joining the faculty at OSU, Strayhorn served as Special Assistant to the Provost at the University of Tennessee, Knoxville (UTK) and founding director of the UTK Center for Higher Education Research & Policy (CHERP).

Dr. Strayhorn maintains an active and highly visible research agenda focusing on major policy issues in education: student access and achievement, equity and diversity, impact of college on students, and student learning and development. Specifically, his research and teaching interests center on two major foci: (a) assessing student learning and development outcomes and the ways in which college affects students and (b) identifying and understanding factors that enable or inhibit the success of historically underrepresented, misrepresented, and otherwise vulnerable populations in education, with a particular accent on issues of race, class, and gender and how they affect the experiences of racial/ethnic minorities, college men, economically disadvantaged individuals, and marginalized groups in postsecondary education.

Professor Strayhorn is sole author or lead editor of 8 books/volumes, including Frameworks for Assessing Learning and Development Outcomes (2006), Money Matters: Influence of Financial Aid on Graduate Student Persistence (2006), African American Student Persistence (2008), The Evolving Challenges of Black College Students (2010), College Students’ Sense of Belonging (2012), Living at the Intersections (2013), and Theoretical Frameworks in College Student Research (2013), to name a few. He has published more than 100 refereed journal articles, book chapters, scholarly reviews, and commissioned reports. He has also presented more than 150 papers at international and national conferences, including invited keynotes and panel discussions. External grants totaling over $2.5 million from agencies such as the US Department of Education, National Science Foundation (NSF), and American College Personnel Association (ACPA) support his research program. In 2008, Dr. Strayhorn received a prestigious NSF CAREER grant, the highest honor that NSF awards early career scientists, for his 5-year project titled, "Investigating the Critical Junctures: Strategies that Broaden Minority Male Participation in STEM Fields," and has maintained consistent funding since.

Named "one of the most highly visible scholars in his field," by the Journal of Blacks in Higher Education, Strayhorn has received the 2007 ACPA Emerging Scholar Award, NASAP Benjamin L. Perry Professional Service Award, SACSA Outstanding New Professional Award, 2008 ACPA Annuit Coeptis Emerging Professional Award, 2009 UTK Helen B. Watson Faculty Research Award, Early Career Award from the Association for the Study of Higher Education (ASHE), and in 2011, Diverse: Issues in Higher Education named him one of the nation’s “Top Emerging Scholars.” Strayhorn has been named “Who’s Who in Columbus,” “20 to Know in Education” by Business First magazine, and one of the most prolific young scholars in the country by several news sources.

Dr. Strayhorn is Editor of Spectrum: A Journal on Black Men (published by Indiana University Press), Associate Editor of the NASAP Journal, and former Associate Editor of The Journal of Higher Education. Member of the editorial boards for the Journal of College Student Development, Journal of Student Affairs Research & Policy, The Review of Higher Education, College Student Affairs Journal, Journal of Black Sexuality and Relationships, and International Studies in Widening Participation, among others. He is actively involved in professional service and national leadership as past-Director of Research & Scholarship for ACPA, past-Chair of the Council on Ethnic Participation within ASHE, Faculty Liaison to the NASPA Men and Masculinities Knowledge Community, member of the American Educational Research Association (AERA) Committee on Scholars of Color, Chair of the AERA Division J Cross-Divisional Collaboration Taskforce, and Chair-Elect of the AERA Research Focus on Black Education Special Interest Group (SIG). He is a voting-member of the ASHE Board of Directors as Member-at-Large and serves on the boards of several organizations, including The Thurgood Marshall College Fund.

Dr. Strayhorn received a bachelor’s degree (BA) from the University of Virginia (UVA), a masters degree (MEd) in educational policy from the Curry School of Education at UVA, and doctorate (PhD) in higher education from Virginia Tech. He is a member of Alpha Phi Alpha Fraternity, Incorporated and a native of Virginia Beach, Virginia.

Intersectionality: A Conceptual and Methodological Tool in Higher Education

Advancing the Success for Black Men in College: Mentorship & Roadblocks

Dr. Terrell Strayhorn, a professor from The Ohio State University, captivated an audience of researchers and policymakers at the Children's Defense Fund and Educational Testing Services co-sponsored symposium on Advancing Success for Black Men in College. He spoke about the severity of the roadblocks many Black students face in the classroom and he emphasized the importance of the mentors in the young people's lives.

When you consider that in Columbus nearly 140,000 residents are college students, there is a hope that they are successful in school, graduate and get a job. But taking a multi-dimensional look at that "success" part, Dr. Strayhorn's research reveals a fundamental need of the student. And it isn't tied so much to good grades or money.