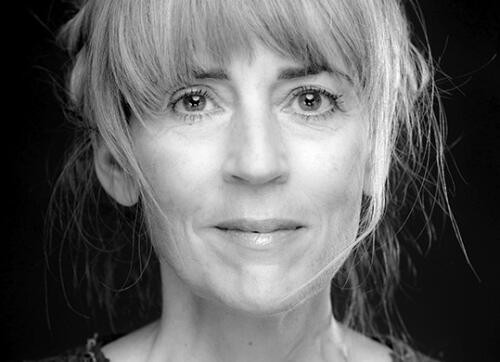 Annie is a practitioner performer theatre maker and writer

She gained a PGCE (distinction) in Film and Drama at Reading University. Then trained at Desmond Jones School of Mime and Physical Theatre with clowning greats like Angela de Castro and Fraser Hooper.She did a bit more Lecoq in Paris, learnt a bit more about coding at Ravensbourne College and is constantly growing by participating in workshops run by the current exciting makers in the world today. Although she has always worked in the industry, she has only recently found the confidence to DIY her own work which has taken her to new and challenging places. She's a registered mentor with Arts Emergency and her continued work with young people remains the vein that runs through her practice.

New Best Thing
In July she coproduced (for the first time ) co -wrote and directed Cissie A new play with folk rock songs  - the collaboration of a music industry professional and a theatre maker specialising in ensemble and visual storytelling. A third draft script had a successful first read through at Diorama Arts Centre London The project aims to engage local audiences using NE actors. A collaboration with Northern Stage and a rehearsed reading at Newbiggin Maritime Centre to a full house using an ensemble of 9 actors and Prelude a folk band followed.

engaging, creative stuff with authentic voice and proper community engagement. People loved it. I wish you all the best with future developments

She tries to collaborate as a performer at least once a year. In 2015 she worked for the first time with Genetic Moo -digital media artists – as part of their Blister Cinema ,Wellcome Trust Project. It was a learning curve.Her performance highlight last year was definitely being part of the Clod Ensemble red ladies at the South Bank London delivering their missions
In the past she has made and directed over 30 ensemble projects, often in public places, with young people and communities in the UK Europe and Africa .I have worked with companies such as Hampstead Theatre, Royal Court, the Globe, Theatre Centre,  Unicorn , Queens Theatre Hornchurch , Cheltenham Everyman and Cheltenham Literature Festival as a freelance practitioner and performer. Often part of the creative teams that develop successful shows such as What the Ladybird Heard? produced by Kenny Wax Ltd and regularly assists with an annual charity concert at the Royal Albert Hall.

She has performed in the West End and the Royal Opera House as well as appearing off West End in several productions. She has played to audiences at Salisbury Playhouse, Colchester Mercury, Manchester Royal Exchange, Leicester Curve, Wycombe Swan, Bath Theatre Royal and to new audiences and communities in castles, village halls and car parks. She was part of Cheltenham Everyman's regular company for 8 seasons. She appeared in a series of 'Harry and Cosh' for Channel 5,'Talk Read and Write' for BBC

As freelance theatre practitioner  she collaborates with major theatres in the UK. She co-wrote Theatre in Practice with Nick O Brien, the Director of The Stanislavski Experience, visiting schools, colleges and universities throughout the UK, running workshops and residences in her specialised areas. Because she is also a professional actor writer and theatre maker she is able to share the contemporary working practice used in her industry. Her workshops energise participants through practical exercises and discover ways into
• Understanding a practitioner
• Applying these skills to text
• Delivering the skills to devise
• Either from the perspective of an actor, director or creative collective. 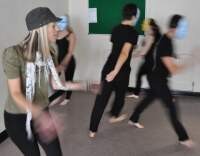 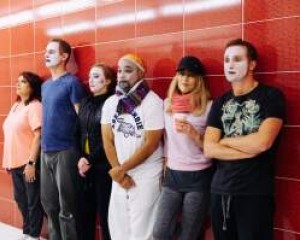 Earlier in 2016 Annie worked with international professional artists in Cairo as part of an Actors Lab using her text book  Theatre In Practice :A Students Handbook.

"Annie is like a guru on contemporary theatre practice.Can't wait to try out the exercises back in my studio "

Credits .With thanks to all participants ,DAP and Paul Sullivan.Photograph by Betty Pie

Image taken from a workshop led by Annie Sutton at CPA for the chapter on Lecoq in Theatre in Practice : A Students Handbook. Photographer : Matt Cooper.