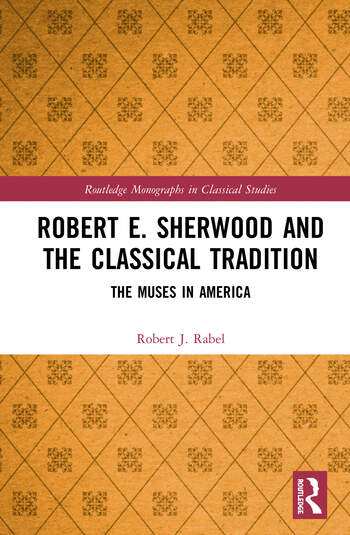 Robert E. Sherwood and the Classical Tradition
The Muses in America, 1st Edition

There is growing interest in the classical tradition: the influence of Greek and Roman literature on modern thought. Robert E. Sherwood was one of the most important Americam playwrights of the twentieth century, and all of his major plays were heavily influenced by Greco-Roman literature. My book is the only existing study of the influence of classical antiquity on Sherwood's plays.

1. Robert E. Sherwood and the Classical Tradition should be of interest to classicists because of the influence of Greek and Roman literature on Sherwood's plays.
2. Sherwood is well know to twentieth-century historians since he was the major speechwriter to American President Franklin Roosevelt. Historians seem to know little about Sherwood the playwright.
3. As a three-time winner of the Pulitzer Prize for Drama, students of drama and of English literature should find much to interest them here.

Robert E. Sherwood and the Classical Tradition required extensive use of archival resources at Harvard and at the University of Texas.

This book was nine years in the making due to the need to read all of Sherwood's plays, letters stored in archives, and manuscripts.