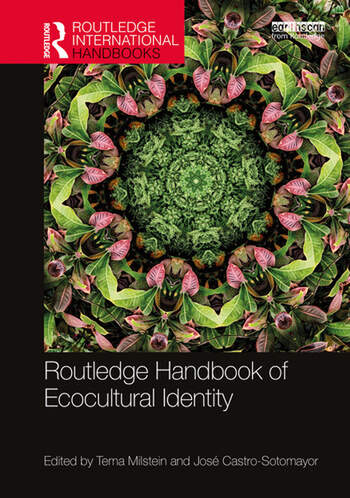 Routledge Handbook of Ecocultural Identity is intended for a wide and diverse audience–from academics and students to activists and politicians, from everyday people to world leaders, from environmental practitioners to people who have not given the environment much thought. The ideas, examples, and studies within are meant to help a wide range of us reconsider who we are and how we relate to one another and the wider planet.

Around the world, we are stepping fully into the Humilocene, this new “epoch of humility,” as Handbook chapter contributor David Abram presciently renames the Anthropocene. In these wild times, our Handbook illuminates how the ways we know ourselves and others are always both cultural and ecological. In illuminating these ecocultural foundations and forces of ourselves, the Handbook expands dominant understandings of who we are and how we engender earthly outcomes.

Routledge Handbook of Ecocultural Identity does this in a variety of ways, including through original theory building and through looking at fresh diverse examples throughout the world (from U.S. evangelical Christians to Thai canal dwellers, from Australian forest guardians to Swedish cattle farmers). In doing so in multiple ways and contexts, we engage the reader in considering how an array of ecocultural identities are fostered. We are particularly interested in highlighting how humanity's many ways of being can squelch or generate environmental conviviality. The Handbook's ultimate goal is to take readers on a journey to see and imagine the many old and emergent ways in which ecocultural identities evolve and transform, and to recall ways forward to reciprocal surviving and thriving.

Today’s problems and opportunities require holistic and kaleidoscopic conversations. As such, the Routledge Handbook of Ecocultural Identity provides far-reaching original transdisciplinary international research on the role of ecocultural identity in processes of local and global disturbance and renewal. Such scholarly inquiries usually are dispersed among separate disciplinary subfields or discrete interdisciplinary schools of thought with relatively small numbers of adherents – and tend largely to be limited to culturally Western regions. In an attempt to broaden and interconnect the conversation, the Handbook’s 40 international authors contribute original research that speaks from a wide variety of disciplinary and multi-disciplinary backgrounds, including geography, communication, environmental studies, anthropology, education, planning, agricultural sciences, linguistics, history, sociology, arts, cultural studies, and philosophy.

We also worked collaboratively with chapter authors to have the diverse and evolving original research and theory-building of this Handbook be accessible to an equally diverse and evolving readership. Where possible, unnecessary discipline-specific or field-specific jargon has been avoided and essential terms that may not have the same centrality of meaning across disciplines or in the public sphere have been clearly defined. Further, we challenged all contributors to avoid unreflexive use of common terms such as ‘nature,’ ‘environment,’ and ‘animals’ – terms that in the context of dominant discourses often function to reproduce notions of a separate, homogeneous, and backgrounded ecological other. Instead, we asked contributors to trouble the tendency to frame the ecological or the animal as separate from or subordinate to the human and to attempt to revive the ecocultural power of language to evoke earthly immersion and relation.

As first editor of this Handbook, the notion for the book emerged out of ongoing ethnographic observations I've made in long-time field research in different spots around the world when examining human relations with the more-than-human world. Specifically, I've long noted the tendency in dominant Westernized countries for people to dismiss or hide feelings of ecocentrism in favor of dominant accepted anthropocentric orientations. I've also studied the decline of ecocentric and mutualist orientations in Global South cultures experiencing highly pronounced ongoing political economic colonization and the coerced replacement of these with dualistic and exploitive orientations of humans separate from and master over "nature." In speaking about these observations with my PhD students and presenting on these observations at international conferences, a conversation unfolded that related to others' research in different places and with an array of fascinating and diverse insights. Eventually, this led to partnering with my former PhD advisee/now co-editor to put an international call out to scholars across disciplines. We wanted to create a transdisciplinary reckoning in order to generate an expanded theory of self, identity, and meaning that understands cultural and ecological relations as in interaction, and as shaping our worlds in many ongoing and possible ways.