The story of an old continent with new ideals.

The authors of the book - Louise C Johnson, Tanja Luckins, and David Walker - were generous enough to sit down and answer our burning questions about this exciting new title.

1. What different forms of scholarship went into The Story of Australia?

Louise C Johnson : In the book, there was the usual approach to history and geographies of the country, namely an engagement with existing works with an awareness of approaches and debates around key issues eg why Australia was settled? how were convicts treated? the extent of Indigenous-European violent interaction in Van Diemen’s Land. We drew on our own research and areas of expertise, for example, David’s long-term work on the relationship between Australia and Asia, Louise on the nature of house designs, the importance of the suburbs and regional transformations with Tanja bringing her expertise and interest in war and memory, and material and popular culture in Australia. But we also drew on a range of different sources, ranging from primary documents to art, literature, statistics and popular magazines.

Tanja Luckins : Ultimately, The Story of Australia is a collaboration that draws on many years of teaching and researching Australian Studies. It draws on our expertise in the disciplines of history and geography and integrates our research including women in suburbia, manufacturing workplaces, war and memory, popular and material culture, and Australia’s place in Asia. It also utilises a rich body of scholarship from disciplines like archaeology, politics, women’s history and Indigenous studies, and engages with historical debates, either raised at the time, or through later scholarship. For example: how should the first contact between Europeans and Indigenous Australians best be presented? Were there moments of curiosity or contempt? Was there ‘dancing with strangers’, as eminent historian Inga Clendinnen has argued, or inevitable misunderstandings and conflict fuelled by Eurocentric cultural superiority, racism and a drive to seize land?

David Walker : People often like to think that history is fixed and settled and that the past is known and can not change. But history is always changing. Each generation brings its own concerns and preoccupations to the business of interpreting history.  As climate change presses upon us ever more urgently, we are forced to think more deeply about Aboriginal custodianship of the land and the impact that European settlement has had. Why did the settlers cling so tenaciously to British tradition and land use patterns in a continent so very different from their homeland? Just as the convicts were imprisoned, so too were the setters by the assumptions they brought with them. The passage of time makes us see more clearly how class, gender and power can determine the way Australian society has evolved. Concurrently, the geography of Australia, most notably its central deserts, tropical north and mineral wealth have shaped our country's limits and possibilities.

2. What will different audiences take away from this book?

LCJ : This book will be relevant to anyone interested in a comprehensive and up to date history of Australia. It is one which brings together the expertise of a number of key cultural historians and a human geographer, offering a unique perspective and coverage as a result. As a consequence, the book will be of relevance to students in upper high school or university studying Australian history or geography as well as the general public who want to know about their country.

It is special in its integration of the history and human geography of the country, with a serious consideration of women, Indigenous peoples as well as the everyday citizen just as much as the politician and business person. The book contains the view from below as much as from above, ensuring the reader is reminded of key and familiar moments in the nation’s story – European occupation, Federation, Worlds Wars – but also less familiar ones – such as Women’s Liberation, the environmental movement, Land Rights and the struggle for Indigenous citizenship.

TL : This book will appeal to anyone with an interest in Australia’s history and geography. It delves into important topics like Australia’s Indigenous past, the uniqueness of the continent, migrants, climate change and Australia’s place in the Asia-Pacific region, topics which define Australia in the 21st century. The student and general reader will gain a sound understanding of the historical background and contemporary relevance of these topics, while the academic reader will appreciate the insights into scholarly debates. We hope that all readers will arrive at a better understanding of the complicated truths of Australia’s past as we emerge into a post-pandemic world.

3. What sets this book apart from others on Australian History?

TL : We were delighted to be commissioned to write this book. This really is an instance of a publisher having their finger on the pulse, knowing that an interdisciplinary account of Australia’s history was missing. The Story of Australia is genuinely interdisciplinary and draws on a range of academic disciplines as well as a diverse range of sources: maps, novels, poetry, art, music, diaries and letters, government and scientific reports, newspapers, architecture and the land itself, engaging with Australia in its historical, geographical, national and global contexts. It is also up to date, and explains recent developments in globalisation, climate change and the COVID-19 pandemic.

The book is set apart by:

DW : In addition, The Story of Australia is the first general history to locate Australia’s settlement in its Asia-Pacific context. We commonly think of Asia as a recent presence, impacting on Australia mainly from the late twentieth century. The Story of Australia demonstrates that the rise of Asia exerted a significant influence a century earlier than this.  The looming presence of crowded Asia was instrumental in forcing the colonies to discover a common interest in defending the continent against incursion from the north and was an important factor in the move towards federation. If Australians of the 1880s who came from different colonies and backgrounds were unclear about what they had in common, they became increasingly certainly that one thing they would never become was Chinese. There was much talk before federation, of ‘one dear blood’ and the ‘crimson thread of kinship’. These ideas underpinned ‘white Australia’ and in our current multicultural environment it is still necessary to understand how this way of thinking came about.

4. How crucial is knowledge of the land itself, in addition to its people, in understanding Australian history?

LCJ : Particular landscapes do not cause human environments but clearly shape those environments. The meaning and role of land is very different for Indigenous vs non-Indigenous peoples and need to be considered separately.

Thus for Indigenous peoples land is fundamental, multi-faceted, combining sentient and non-sentient elements which connect over time and space with humans and are variously interpreted through story via the notion of “country”. There is a deep and complex integration of Indigenous peoples to their country which is very different from the connections generated by non-Indigenous Australians.

In contrast non-Indigenous Australians have long seen the land as a resource, be it for agricultural, buying and selling or mining. How it has been perceived changes over time and is shaped by the cultural baggage brought to each site. So for example, a wheat farmer would view the South Australian landscape north of Adelaide in a very different way to a sheep-grazing pastoralist or a painter educated in the romantic style.

TL : The history of the land cannot be separated from the present. The continent, understood in both geological and Indigenous terms, is a dynamic and changing presence, informing a range of experiences from invasion/colonisation and land rights to mining and the environmental movement.

DW : Land and climate have exerted a powerful influence on the way Australians came to see themselves. The light and colour that was so important to Australian artists from the late nineteenth century played a key role in shaping the Australian identity. The physical environment encouraged a culture of the outdoors and belief in the physical vitality of a beach-loving, sun-bronzed, people.

5. Why is it important for modern Australians to have a cultural understanding of the land/its previous peoples?

LCJ : Understanding the Indigenous view of land is fundamental to appreciating the deep connection to country and understanding how it works is critical to how everyone views the nation and its First Nations people but also its future management

DW : It is pretty clear that the land feeds us and if we do not understand its limits and its vulnerabilities and protect the wealth of its fauna and flora we will end up in a very bad place.  In damaging the sites that are unique to Australia, like the Great Barrier Reef, we damage not only our economy but also ourselves. The Story of Australia asks questions about what it is that we want to protect and pass on to our children.

6. The three of you are all accomplished academics and authors – how has the Australian cultural landscape changed since you began studying it?

TL : Gosh! So much has changed. Technology especially the www and digital information has had a huge impact on teaching and researching, while women, environmental activists and Indigenous peoples now have an even greater presence in scholarly works. In the past generation, climate change has replaced nuclear war as the gravest threat to the planet. Australia, as one of the world’s biggest exporters of gas and coal, has a critical role to play in reducing fossil fuel emissions.

DW : Since I became an academic, Australia has become more multicultural and more aware of its Asia-Pacific context. Asia is often seen as important to our future, but we can now also see how it has shaped our past. As a male historian, I have watched the centrality of the white male as the defining national figure undergoing well-merited erosion. That said, male power remains very strongly entrenched in Australia’s political and business culture. It is clear that under Covid, women and minorities have suffered most, something we have to address.

7. Were there any pivotal moments in the book’s development where new information or research led the book in a new direction?

TL : Perhaps the key moment was the emergence of COVID-19. This global pandemic made us think about the impact of globalisation and how people maintain their local community and family ties.

The Story of Australia is available now on routledge.com

"How important it is to have a contemporary history of Australia that takes its geography seriously – that grounds Australia’s stories and events firmly and explicitly in places, land and environments. This book chronicles Australia’s diverse people - their struggles, their achievements and losses, those who took power and those who were marginalised at different times. But it also directs us to the places they shaped and that shaped them, from Indigenous people in country to the residents and workers of present-day cities and suburbs. It is a fine achievement indeed to make these important connections and to insist that they must be made."

- Ruth Fincher, The University of Melbourne

"A new history for a new generation: a highly accessible account of social and political change, skilfully interwoven with cultural references, high and low, and a deep understanding of the land and its peoples." 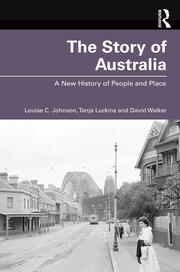